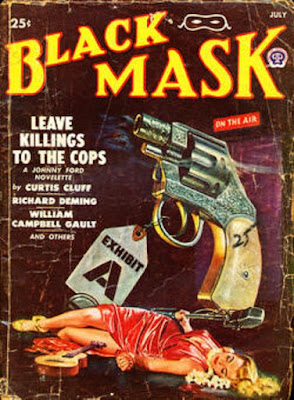 It's taken me a while, but I've read the third novella in Richard Deming's series about private detective Manville Moon, who lost his right leg from the knee down fighting in World War II but doesn't let that slow him down when it comes to solving murders and fighting with mobsters and killers. In "A Shot in the Arm", published originally in the July 1948 issue of BLACK MASK, Moon is hired to help a rich, beautiful young woman kick her morphine habit. (Didn't something similar to this happen to the Continental Op in THE DAIN CURSE? It's been a long time since I read that book.)

Unfortunately, there's been a murder before the story even opens, and there's another one soon after, and Moon is left trying to sort out the killings as Deming fills in the background with a lengthy flashback. Sometimes I'm not a fan of that technique, but it works pretty well here and Deming is such a good writer that he keeps things racing along in a swift, smooth manner. The dialogue is good, Moon is a great character, and the mystery is fairly clued and seems to hold together pretty well. I enjoyed this yarn quite a bit. It's available as an inexpensive e-book, if you don't have that issue of BLACK MASK in your collection.