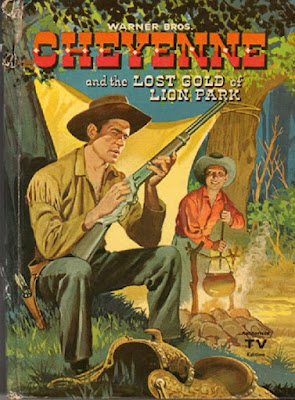 When I was growing up, I loved the TV show CHEYENNE, and I also read a bunch of the juvenile novels published by Whitman and based on different TV series, so how come I never read this one until now? Basically, I never knew it existed until recently, but once I found out about it, and that it was written by well-respected Western author Steve Frazee, I had to hunt up a copy. That's it in the scan above.

As I’m willing to bet that most of you know, Cheyenne Bodie, played by the great Clint Walker, was a drifting cowboy/army scout/stagecoach guard, or whatever else that week’s story required him to be. In CHEYENNE AND THE LOST GOLD OF LION PARK, he’s working for the railroad, trying to locate a fortune in gold stolen in a train robbery twenty years earlier. The outlaws, a trio of brothers, had a hideout in a high mountain basin called Lion Park. Supposedly, they cached the loot somewhere in the basin and then disappeared. Nobody knows what happened to them or where the missing gold is.

Since these Whitman novels were marketed to kids, the protagonists always had to a young sidekick, except in those books where the actual protagonist was a kid. In this novel, there’s a young man living in a nearby town who has done some hunting and exploring in Lion Park, and he volunteers to help Cheyenne as a guide. His father, a former lawman, allows him to go along with Cheyenne. They’re searching for a mysterious old-timer who may have some connection to the missing outlaws. Unfortunately, they’re not the only ones on the trail of the gold. A couple of hardcases follow them into the basin, and then it’s a race to see who can locate the gold first . . . and if they can survive.

Frazee was an excellent author of hardboiled Westerns, so it’s a bit of a surprise that the main flaw in this novel is a lack of action. Most of it is Cheyenne and Rory, the kid sidekick, puttering around the canyon and trying to avoid the two hardcases. But Frazee does a great job with the setting, and when violence does erupt occasionally, it’s quite effective. Also, he captures Cheyenne’s personality pretty well. Sometimes in these Whitman novels, the characters have the same names as their TV counterparts but don’t really act or sound like them. That’s not the case here. Plus Rory is a good sidekick, only occasionally doing dumb stuff.

Overall, CHEYENNE AND THE LOST GOLD OF LION PARK is just too blasted mild to reach the top ranks of Whitman TV tie-ins. But it’s well-written and a pleasant way to spend a couple of hours. It also made me want to watch some episodes of CHEYENNE. I have the first season on DVD. May have to dig out those discs and revisit it.

Frazee's He Rode Alone is a great Gold Medal book and one of my favorite westerns.

I've always been intriqued by some of the Whitman tie-ins he did, but have not ever read one. Thanks for doing this review and for your insights.