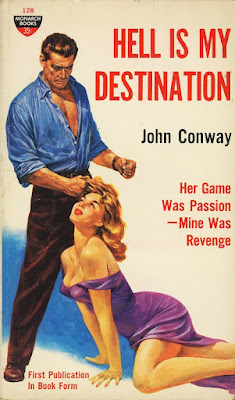 Joseph Chadwick was a prolific contributor to the Western pulps, writing dozens of stories under his own name and also turning out novels featuring Jim Hatfield (under the Jackson Cole house-name), the Rio Kid, and the Range Riders. As the pulps faded away in the Fifties, he turned to writing original paperbacks, mostly Westerns, but he also wrote soft-core sleaze, plantation novels, and crime novels under the names John Creighton and John Conway.

One of those John Conway novels is HELL IS MY DESTINATION, published by Monarch Books in 1959 with a great cover. The art may be by Ray Johnson; I’m not enough of an expert on Johnson’s work to be sure about that. But it promises a lurid, noirish yarn, just the sort of thing I enjoy. However, that’s not exactly what this novel delivers.

Instead, HELL IS MY DESTINATION is a rather slow-paced police procedural. The protagonist, Tom Matthews, is a police detective who is warned off from investigating a gas station stick-up in which the proprietor was shot and killed. Despite that tragic death, it seems like a fairly minor case, not worth threatening a cop over, especially when the primary suspect is a petty criminal. But then the stakes get higher as Matthews’ crippled son is struck and killed by a car in what is clearly not a typical hit-and-run. Unless he lays off the case, his wife and daughter are next, he’s told.

Well, that’s not going to happen. Matthews promptly quits the force so he can conduct his own investigation without playing by the rules. At least, that’s what he says, but even though it’s not official, his investigation is as plodding and dogged as if he were still carrying a badge. Oh, other than sleeping with his former mistress to get information, I guess. Got to get the racy scenes in there somewhere. This is a Monarch book, after all.

The whole thing is told in plain, flat, almost DRAGNET-like prose, but lest you think I’m damning with faint praise, let me make it clear that I enjoyed HELL IS MY DESTINATION quite a bit. It’s just not what I expected from the cover. It takes a while to get going good, but I’m glad I stuck with it. The second half generates considerable suspense, and while the solution isn’t unexpected, it works pretty well. Chadwick has never been one of my favorite Western writers, but his work is always competent and sometimes very good to excellent. This is the first crime novel by him that I’ve read, and I liked it enough that I’ll read more. Don’t run out and start looking for HELL IS MY DESTINATION, but if you come across a copy, it’s worth reading.