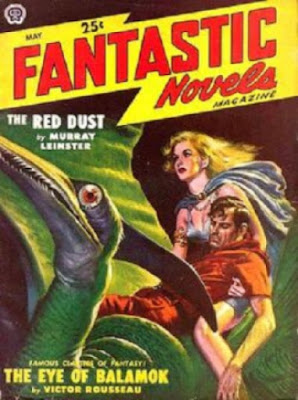 This reprint pulp from Popular Publications usually had good covers like this one by Lawrence Sterne Stevens, usually credited as just Lawrence. Most of the stories were drawn from early Munsey pulps, which Popular had acquired the rights to several years earlier. This issue features a novel by Victor Rousseau published originally in ALL-STORY WEEKLY in 1920. I've read a reprint of "The Eye of Balamok", but it was many years ago and all I recall is that I liked it. By the time this pulp came out, Rousseau had been a stalwart of the Spicy/Speed line for a decade, under his name and numerous pseudonyms. I don't think I've ever read Murray Leinster's "The Red Dust", but I'm pretty sure I have a copy of the novel version somewhere. It was published originally in ARGOSY ALL-STORY WEEKLY in 1921. Rounding out the issue is the Max Brand short story "Devil Ritter", which I think I've read but I'm not sure. It comes from a 1918 issue of ALL-STORY WEEKLY. One interesting thing about FANTASTIC NOVELS is that it featured a letter column, and this issue includes letters from future pros W. Paul Ganley and Samuel A. Peeples, who wrote Western novels as Brad Ward and under his own name, scripted at least one episode of STAR TREK, and created the TV series LANCER.
Posted by James Reasoner at 4:30 AM

In the 80s, 90s and Aughts, there were still quite a few vendors at comic conventions that regularly had pulps for sale, and there always seemed to be more FANTASTIC NOVELS and FAMOUS FANTASTIC MYSTERIES in the long-boxes than any other titles. Subsequently, they could usually be had for about 5 bucks apiece (and in decent shape too). At those prices, I’d usually end up buying four or five at a time (along with the occasional STARTLING or THRILLING WONDER). At first I focused on authors that I knew I liked (Merritt, Haggard, Hodgson) or had never read but was interested in trying (Francis Stevens, John Taine, et al) and eventually I’d just get ‘em If the cover art looked appealing. At five bucks a pop, you could hardly go wrong.

Turns out I never got that EYE OF BALAMOK issue. Think I’ll head over to the Internet Archive to check it out....

I read a lot of Fantastic Novels in my early pulp consumption. Think I found a huge batch at a used book store in Phoenix. Ganley seemingly had a letter published in every issue. In the early 90s (I think) I met him at a Lovecraft convention in Providence. He seemed quite surprised I recognized his name from his letters.