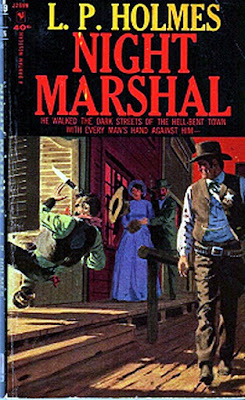 As I’ve mentioned before, I only started reading L.P. Holmes in the past ten years or so, even though I saw paperbacks of his Western novels around all the time when I was a kid. I’m not sure why I never picked up any of them. However, that’s worked to my benefit since I’ve found that I really enjoy his work, and there are still quite a few books and stories by him left for me to read.

Most recently, I read his novel NIGHT MARSHAL, published in hardback by Dodd, Mead in 1961 and reprinted in paperback by Bantam in 1964, the edition I read. That’s my copy in the scan. I don't know who painted the cover.

The protagonist is Chris Waddell, a down-on-his-luck lawman who takes the job of night marshal working for an old friend and mentor of his who’s the top lawman in the wild Montana mining town Midas Hill. Problem is, Waddell is still a straight-shooter while his old friend and boss has gone soft and corrupt and is under the thumb of the saloon owner and mining magnates. If Waddell wants to bring any real law and order to Midas Hill, he’ll have to buck all of them, which means he’ll have enemies on all sides.

From what I’ve read of his work, Holmes never strayed from the traditional Western elements but did an excellent job of working within that framework. I’ll be honest: while it’s enjoyable, NIGHT MARSHAL is the weakest novel of his that I’ve read so far. The plot meanders along and is really slow to develop, he sets up several characters and conflicts but then never does anything with them (speaking in particular of a potential romantic triangle that he never does anything with and seems to forget, as well as never resolving the question of whether a particular character is one of the bad guys or not), and the book ends in rather hurried fashion.

That said, Holmes does a fine job with the setting, the dialogue is good, Waddell is a likable, easy to root for protagonist, and the final shoot-out is effective even though it could have been longer and more dramatic. I’m glad I read the book, even though NIGHT MARSHAL isn’t one that I’d give to somebody who has never read Holmes before. If you’re already a fan of his work and come across a copy, I wouldn’t pass it up.

It seems to me that the hand of the cover artist could be that of William George. You can confront the covers of "Adobe Walls" by
W.R.Burnett Bantam Ed. and "Under the Badge" by C. Hall Thompson Dell Ed. with that of Night Marshall.
Greetings from Italy,
Tiziano Agnelli

I looked at those other two covers and I think you're right. It certainly looks like it could be William George's work on this cover.