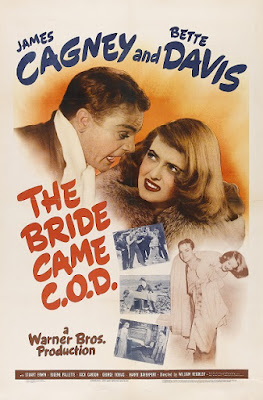 I admit, when I think about screwball comedies, James Cagney and Bette Davis are not among the first names that come to mind. However, we were in need of something to watch, and we’d never seen THE BRIDE CAME C.O.D., so . . .

This movie has a pretty complicated set-up. Davis plays a Texas oil heiress who, after a whirlwind courtship, is about to elope from Los Angeles to Las Vegas with smarmy bandleader Jack Carson (the marriage being egged on by radio gossip columnist Stuart Erwin). Davis’s father, the great Eugene Pallette, is strongly opposed to the marriage. The couple hires Cagney, the owner of an air charter business who’s about to lose his plane to the finance company, to fly them to Vegas, but Cagney, learning of Pallette’s opposition, strikes a deal with the oil tycoon to break up the wedding and bring Davis back to Texas. Got all that?

Actually, it’s all just an excuse to strand Cagney and Davis in an old mining ghost town that may be in California or may be in Nevada. That uncertainty actually becomes part of the plot later on. The screenplay by Julius and Philip Epstein (who wrote another movie that came out in 1941 you may have heard of: CASABLANCA) is full of banter, racy innuendo, crazy coincidences, and Davis falling in cactus. Cagney and Davis argue for the whole movie and then wind up falling in love, which was the whole point, of course.

This movie doesn’t have much of a critical reputation, and evidently the stars didn’t care much for it, either, but I enjoyed it quite a bit. Yes, it’s predictable, but so are a lot of movies I watch. No, it’s not uproariously funny, but I chuckled numerous times and smiled a lot. And that supporting cast! In addition to the ones I’ve already mentioned, George Tobias plays Cagney’s airplane mechanic, the great William Frawley is the sheriff of Los Angeles County, and Harry Davenport is an old desert rat. And despite what they said later about the movie, Cagney and Davis both appear to be having a great time. THE BRIDE CAME C.O.D. doesn’t belong in the top rank of screwball comedies, but I think it’s certainly better than the much more praised THE AWFUL TRUTH, with Cary Grant and Irene Dunne, that we watched a couple of months ago. I’m glad we watched it.

I agree. While not great, I found it entertaining and fun to watch, with a great supporting cast.

One correction: CASABLANCA was released in November of 1942, not 1941.

Thanks, Jeff. I didn't look it up, was just going by memory.

I came across this film once, back when AMC used to actually play movies, and I still remember how amusing it was. A great example of the studio system at work. Like Casablanca, all the elements of writing, directing, editing, staging and sets, supporting actors and likable leads that were on hand at the studio, all come together for an entertaining movie.

Actors are not always the best judge of their work. The film is fun to watch and in the end that is what matters most to those that bought a ticket or discovered it years later. Enjoy.