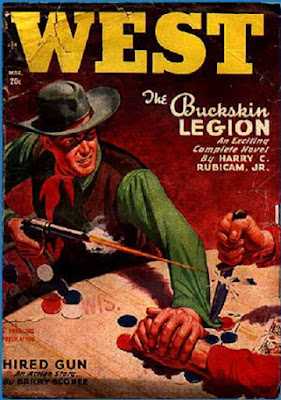 An interesting cover by an unknown artist. The shadow almost makes the guy look like he's wearing a mask. And of course, this cover is further evidence that no poker game in the Old West ever ended peacefully. I also find it curious that a story by Harry C. Rubicam Jr. gets such prominent treatment when ol' Harry, whoever he was, apparently only published one other story in his career, also in WEST a couple of years earlier. He wrote a few non-fiction books and at least one Western novel, but this issue also includes stories by Johnston McCulley, Allen K. Echols, Richard Brister, and Dupree Poe, and if I was the editor I would have put any of them on the cover ahead of Rubicam. Barry Scobee is on the cover and was a top-notch pulpster, so I agree with that editorial decision. Anyway, it's an eye-catching cover.
Posted by James Reasoner at 5:00 AM

I wonder about the work of the cover artist. What kind of gun is that? What kind of western hat is that? I think that the cover is more
suitable for a detective story. And the character really could be a masked vigilante.
Best,
Tiziano Agnelli

Interesting idea. The gun does look a little odd. The pulps in the Thrilling Group did sometimes use cover art revised from other appearances. (Leo Margulies later did this constantly in his digest magazines.) I don't think it's from a Phantom Detective cover, but if I can find the time I might scroll through the Fictionmags Index and look at the covers on POPULAR DETECTIVE and EXCITING DETECTIVE.

Harry C. Rubicam Jr. may have seemed a promising author who never wrote another word. Or perhaps this was a housename disguising an author already in the issue? As for Johnston McCulley, "Zorro's Stolen Steed" was a good story (loosely adapted into a great episode of the Guy Williams television series), but most of the WEST entries were very short. Zorro didn't even get the cover for the full-length "A Task For Zorro" (June 1947) — the cowboy firing over saloon batwings was sufficiently generic (like most WEST covers) to appear on any issue.