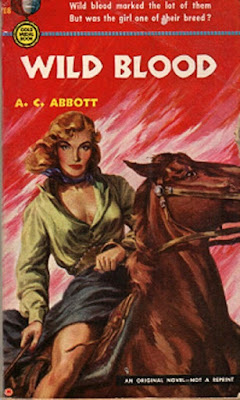 I admit, I bought this book for that great cover (that’s my copy in the scan), having never heard of it or the author. But sometimes a gamble like that pays off, and such is the case with WILD BLOOD, a 1951 Gold Medal Western by A.C. Abbott.

The plot of this novel is very traditional. After several years away from home, Jim Dixon returns to the ranch in Arizona where he grew up in response to a plea for help from his father. Jim had left home because was forced to kill one of the sons of a neighboring rancher in a gunfight. Complicating the matter is the fact that Jim was in love with the other rancher’s daughter, the sister of the man he gunned down. Since then, that rancher has passed away and his surviving son has taken over running things. And he’s spoiling for a range war with Jim’s father. 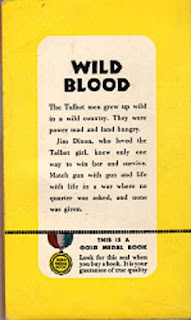 Throw in the local storekeeper’s beautiful daughter, who’s in love with Jim, a gunfighting friend who may or may not be trustworthy, two young cowboys suspected of being rustlers and stagecoach robbers, some old geezers, and all the standard elements are there. The situation ratchets up with bushwhackings, brutal fistfights, barns burned down, and a lynching. Our hero Jim takes an incredible amount of punishment in this book, having to recuperate from several serious injuries, and keeps coming back for more until everything builds to a very violent climax.

The author’s ability to create complex and interesting characters and spin this yarn in tough, very fast-paced prose lifts WILD BLOOD from a run-of-the-mill traditional Western to an excellent novel. It has its pulpish touches, but they don’t detract from the story and characters.

Naturally, having never heard of A.C. Abbott, I had to do some investigating. As it turns out, Abbott was a fairly prolific contributor to a variety of Western pulps, publishing approximately 70 stories in an eight-year career from the late Forties to the mid-Fifties. Many of those stories appeared in the Western romance pulps such as RANCH ROMANCES and RANGELAND LOVE STORIES. Early on in reading WILD BLOOD, I had a hunch the author might have been female. There’s a little more emphasis on what the characters are feeling than you usually find in Fifties Westerns written by men, as well as one of the more believable romantic rectangles I’ve encountered in a Western. Sure enough, after a tip from my friend Tom Simon indicated that “A.C. Abbott” was a pseudonym for someone name H.A. Meinzer, born in 1918, I was able to track down a gravesite for Helen Abbott Meinzer, born in Idaho in 1918, died in Arizona in 1963. Although that’s not definitive proof, I’m confident that Helen Meinzer was the actual author of WILD BLOOD, as well as those pulp stories and one other novel, BRANDED, published by Signet in 1954. (I have a copy of that one, as well.)

Don’t mistake WILD BLOOD for a romance, though. Sure, it has a certain amount of “woman interest” (as the pulp editors called it) in it, but it also has plenty of action, and honestly, some of those scenes are as bloody and brutal as anything written by most male Western authors in that era. It was a time of hardboiled Westerns, and this book certainly fits that description. I found it really entertaining and compulsive reading, and I’m glad the cover prompted me to buy it. I don’t know who painted the cover, but he (or she) did the job well.

I confirm you supposition. I take the following item from:
General Catalogue of Printed Books: Photolithographic Edition to 1955, Volume 1