Forever and a Day - Anthony Horowitz 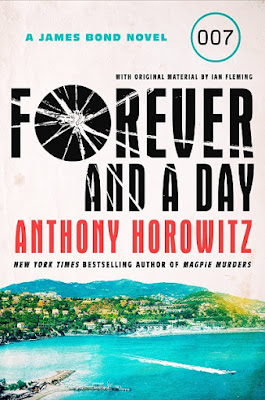 In the Sixties, I read all of Ian Fleming’s James Bond novels and stories while I was in junior high and high school, plus COLONEL SUN, the Bond novel by Kingsley Amis writing as Robert Markham. In the Eighties and Nineties, I read most of the Bond novels written by John Gardner (whose Boysie Oakes novels I’d also read back in the Sixties). When the series continued on into this century under the authorship of Raymond Benson, I read nearly all of those books, as well. But I’d never read any of the more recent Bond novels by various hands, until recently until I was really in the mood for one and decided to give FOREVER AND A DAY by Anthony Horowitz a try.

I’d never read any of Horowitz’s other novels, but I’ve seen and enjoyed some of the TV series he’s written. I read enough about FOREVER AND A DAY to know that it’s set in 1950 and is a prequel to CASINO ROYALE, Fleming’s first novel. Setting a Bond novel in the right time-frame was enough to predispose me to like this book. I generally don’t care for updatings and reboots.

The opening is promising, too, with 007 being murdered in Marseille. Not Bond, of course. The agent who had the 007 designation before him. Horowitz then covers Bond’s promotion of the Double-0 section, after which M gives him the assignment of finding out what happened to his predecessor. Bond doesn’t have much to go on: he knows the murdered man was investigating a French drug kingpin named Scipio, and there’s also a connection to a beautiful former British operative known as Madame 16 who has gone rogue and formed her own intelligence network. (Shades of Modesty Blaise!)

Bond’s investigation is very Flemingesque, if that’s a word. Bond gambles at Monte Carlo, meets the lovely Sixtine, has a run-in with the sinister Scipio and is threatened with torture (don’t worry, there’s plenty of actual torture, another Fleming hallmark, later on), and uncovers a connection with an American millionaire who may be an innocent dupe, or not.

There are some very nice scenes and some great Easter eggs about the character’s history (including a chapter based on an outline Fleming wrote), but really, the first two-thirds or so of this book are leisurely paced, more of a slow burn than a thriller. Horowitz really has Fleming’s style down, and it’s a pleasure to read. Eventually things kick into a higher gear, though, and FOREVER AND A DAY really takes off. When it does, it turns into pure greatness. The last 50 or 60 pages are just exhilarating, and I couldn’t turn those pages fast enough. I was back in the Sixties, sitting on my parents’ front porch on a warm summer day, totally caught up in what I was reading, and I can’t give a book a higher compliment or a better recommendation than that.

FOREVER AND A DAY (great title, by the way, also very reminiscent of Fleming) is the best book I’ve read so far this year. Horowitz has written another Bond novel, TRIGGER MORTIS, and I have a copy of it as well, so I look forward to reading it, too. In the meantime, if you’re a James Bond fan and haven’t read this book, don’t miss it.

James, I read FOREVER AND A DAY when it came out last year and I don't remember a blessed thing about it, other than the "007 is dead" opening. Dittp TRIGGER MORTIS, other than the latter opens with Bond and Pussy Galore parting ways some time after the Goldfinger caper. The John Gardner pastiches were hit and miss, mostly miss when Gardner tried to create exotic villains in the Fleming mode and hit when he spun a more traditional spy story (ICEBREAKER, WIN LOSE OR DIE). The best of all the pastiches to my taste was the first, COLONEL SUN, partly because Amis was writing in the same era as Fleming and didn't need to acknowledge all of the subsequent social upheavals in sexual, racial, and other attitudes.

I remember I liked COLONEL SUN quite a bit and thought it fit in pretty seamlessly with Fleming's books. Novels set in that era but written now are really historical novels, which require a slightly different approach and skill set, so I agree that Amis had a bit of an advantage there. I really liked Gardner's first couple of Bond books but thought they became more inconsistent as the series went on.

The pastiche I probably won't ever read is Deaver's (and I like Deaver's work, overall). I just don't have any interest in an updated, 21st Century James Bond . . . although I guess that's what we get in the movies, isn't it? Oh, well, I didn't much like any of the Daniel Craig Bonds, although I've watched them all and thought he was great in KNIVES OUT.

James, your worry about Deaver’s book is well-founded. After the first few chapters I started thinking of it as ‘James Bond And His Magic Cellphone’. Other than the fact that Bond’s phone has an app for EVERYTHING, I thought it was a pretty decent 007 continuation novel.

I haven’t read either of Horowitz’ books yet, but you make this one sound appealing.

I may have to give this one a try.

Have you read FOREVER AND A DEATH, James? It's a novel boy Donald E. Westlake that's based on a screenplay he wrote for a Bond movie.

No, I haven't read the Westlake book, but I'll probably get around to it eventually. I've seen mixed responses to it, but he was a fine writer and I've enjoyed just about everything I've read by him.

I steer clear of these modern Bond novels because they want their cake and to eat it, too -- they're set in the Fleming era but they have jarring modern sentiments. Horowitz in particular is guilty of saddling the series with some very modern notions, like Bond in Trigger Mortis being shamed for his outdated thoughts on homosexuality...by an openly gay secret agent in the 1950s!! I know, it's ridiculous to even talk about, but it's these little details that drive me nuts. But then, I doubt any publisher of today would release something that actually "felt" like a book from the '60s. But still it rankles me that these modern Bond writers even bother to set their books in the past. As you all say, Amis was lucky because he was writing in the actual era. I imagine though that reading Trigger Mortis directly after Goldfinger (when it's set) would cause for a bumpy experience. There's a great overview of this Bond revisionism here.

Great review, though, James -- and I'm always happy to hear that someone else isn't a fan of Craig's Bond!

Joe,
I didn't notice any of those modern sensibilities creeping into FOREVER AND A DAY, but I wasn't looking for them, either. I agree, a scene like the one you describe in TRIGGER MORTIS would jump out at me. I'll still read the book because I enjoyed this one so much, but anachronisms do bother me if they're too blatant.