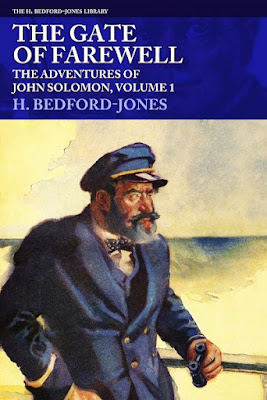 Of the many, many series written for the pulps by H. Bedford-Jones, his longest-running featured a fat little Cockney named John Solomon, which ran from 1914 to 1936 and encompassed more than twenty novels and novellas. John Solomon may not seem very impressive at first glance, but he actually runs a far-flung intelligence network and makes a specialty of thwarting all sorts of criminal and espionage schemes around the world. I’ve been aware of this series for years but hadn’t read any of them until recently, when I started at the most logical place, the novel THE GATE OF FAREWELL, which was published originally as a serial in ARGOSY in 1914 and is Solomon’s first appearance. (It was later published as a novel under the pseudonym Allan Hawkwood.) 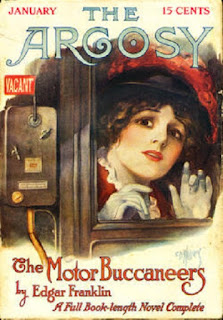 Solomon is a supporting character in this book and doesn’t play much of a part in the action until the late stages. The protagonist is an American businessman named Allen Tredgar, who is searching for his older brother who vanished in Arabia five years earlier. He hires a captain and a ship, gets a tip on where to look for his brother from John Solomon, goes through the Suez Canal, and then heads down the Red Sea to the area where his brother disappeared.

Unfortunately, there’s a sinister American working against Tredgar’s interests, and things are complicated even more when Tredgar and his companions rescue a beautiful young woman blown out to sea in a small boat during a storm. Ultimately, everybody winds up in a fortress on the coast of Arabia built by what today we would call an Islamic terrorist group. Torture, slavery, and epic battles ensue, along with a hunt for ancient relics that will give whoever possesses them great power in the Middle East. 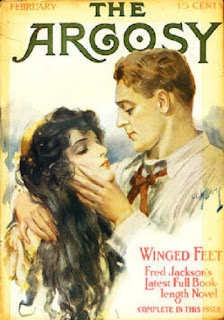 For a novel written and published more than a hundred years ago, THE GATE OF FAREWELL is surprisingly modern. I can see this same basic plot being used by a number of today’s thriller writers (although the resulting book would be three or four times as long). This early in his career, Bedford-Jones’ prose is still a bit stodgy and old-fashioned and not as crisp and stream-lined as it would be later. Also, the plot is rather slow to develop, leading to the first half of the book just sort of meandering along.

The second half, though, has a lot of punch, building up a considerable amount of suspense that delivers an action-packed climax. The characters are interesting, including a suitably despicable villain. Bedford-Jones lays the groundwork for more adventures of John Solomon, which I’m sure I’ll be reading. THE GATE OF FAREWELL isn’t in the top rank of H. Bedford-Jones’ novels, as far as I’m concerned, but it’s an entertaining adventure yarn in the classic style and well worth reading, especially as an introduction to his longest-running character.