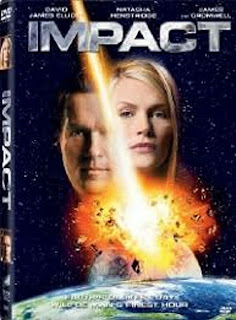 (This post originally appeared in somewhat different form on September 1, 2010.)

From what I can tell, this is a Canadian/German TV mini-series released as a feature film on DVD. It’s an old-fashioned disaster movie, complete with brilliant but impossibly good-looking scientist heroes, cute kids, grumpy but heroic old-timers, clueless politicians and military officers, and no real villains other than a capricious universe. In this case, the trouble starts when during a meteor shower, a chunk of a brown dwarf star slams into the Moon and imbeds itself deep beneath the lunar surface. The impact, plus the added weight of the incredibly dense dead star, throws the moon into a crazy orbit that makes gravity go crazy on Earth. Even worse, the Moon’s orbit is going to deteriorate to the point that it will eventually crash into Earth itself, shattering the planet.

I’m no scientist, but most of the scientific explanations in this movie sound pretty sketchy and the actors rush through them as if the director doesn’t want the audience thinking too much about them. To be honest, though, nobody watches stuff like this for the science. We watch for soap opera and stalwart heroics, both of which are in abundant supply in IMPACT. David James Elliott is the strong-jawed scientist hero, playing the role like something out of a Doc Smith novel, and Natasha Henstridge is the most gorgeous brainiac since Denise Richards in that James Bond movie, whichever one it was. James Cromwell is the father-in-law of Elliott’s character, Steven Culp is the President, and the rest of the cast consists of actors I’ve never heard of, although they may be well-known in Canada and Germany. Everybody is very earnest, which is understandable when the Moon is going to crash into the Earth in a month.

Despite my borderline snarkiness and the predictability of the script, IMPACT actually is pretty entertaining and manages to generate considerable suspense at times. I’m not suggesting you rush right out to pick up a copy, but watching it is an okay way to spend a couple of evenings or a long afternoon when you don’t have anything better to do.
Posted by James Reasoner at 4:30 AM

The World is Not Enough was Denise Richards' Bond movie. Bill Crider always said she was robed of her rightful Oscar for her performance.

I thought about Bill when I wrote that Denise Richards line back in 2010 and thought about him again when I scheduled this repost. Of course, in recent years not a day has gone by when I didn't think about him.