Forgotten Books: Oh, For the Life of an Author's Wife - Elizabeth Charlier Brown 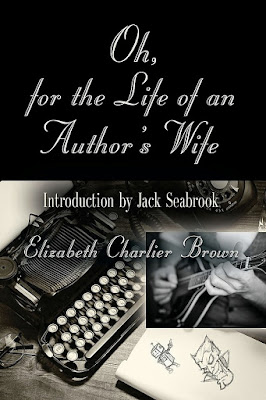 I’ve mentioned before that I like to read books about writers. Here’s one that’s a little bit different. OH, FOR THE LIFE OF AN AUTHOR’S WIFE is by Elizabeth Charlier Brown, Fredric Brown’s second wife who was married to him from 1948 until his death in 1972, during the most successful part of his career.

Elizabeth, or Bethie, as Fred called her, wrote this book in 1958, but it’s gone unpublished until now. It’s a fine memoir. Elizabeth Brown wrote and sold a few stories to the love pulps in the early Fifties, so she wasn’t exactly an amateur writer, but this book does have a charmingly unpolished air about it, more like you’re sitting with her and she’s telling you the stories in person. She writes quite a bit about the domestic side of the life she shared with Fredric Brown, the moving from state to state (Fred Brown was a very restless person and never liked to stay in one place for too long), the houses where they lived, the friends they made, the parties they attended, etc. But for those of us more interested in the writing side of things, she also goes into detail about what Fred was working on when, how some of the books came about, how his famous habit of taking long bus trips to work out his plots originated, even how much money he was paid for his books and stories. I’m often surprised by how little money was made by writers I’ve thought of as having long, successful careers. The Browns, for example, sometimes had to borrow money just to pay bills.

There are also numerous passages about other writers the Browns met and befriended, including a mention of Sam Merwin Jr., my old mentor from the MSMM days. It’s all fascinating stuff, and I had a hard time putting the book down because it seemed like there was always another nugget about the world of mystery and science fiction publishing in the 1950s just waiting to be discovered in its pages.

I’ll admit, I’m woefully under-read when it comes to Fredric Brown. I’ve read two or three novels and a handful of his short stories, but I’ve enjoyed them all and really need to read more by him. This volume may prompt me to do just that. I really enjoyed it, and if you’re a Fredric Brown fan or just someone who likes reading about authors, I give it a high recommendation.

I 'll have to give this one a try as Fredric Brown is a favorite of mine. Started with his Science Fiction when I was in high school (many decades ago) and moved on to his mystery novels later on.

Brown is definitely worth reading. Fortunately his sf is available from NESFA, his short mystery fiction from Haffner, and some novels from Centipede. There may be other editions I don't know about.

Thanks for the tip on this one, James.

This book got me to finally pull the trigger on ordering those Haffner Press collections.

Thanks for the review. I look forward to reading it.

If you haven't already read them, James, I recommend his mystery THE FAR CRY and his science fiction novel THE LIGHTS IN THE SKY ARE STARS, although anything he published is certainly worthwhile. Brown's was a unique vision and all of his work is enjoyable.

I read THE LIGHTS IN THE SKY ARE STARS many years ago but don't remember anything about it except that I enjoyed it. I've also read his mystery novel THE SCREAMING MIMI and maybe one more. I have THE FABULOUS CLIPJOINT and MADBALL on hand, and maybe MARTIANS GO HOME and WHAT MAD UNIVERSE, I didn't really dig down in the stacks but I think I own them. And I bought a copy of COMPLIMENTS OF A FIEND today when I happened to be in a used bookstore. Now I just need more time . . .

Great minds think alike! I reviewed OH, FOR THE LIFE OF AN AUTHOR'S WIFE as an FFB today, too! And, I liked it for many of the reasons you did: details of Fredric Brown's writing life and his methods. He sure did move around!

Thank you for the review. Though I have to say that your reviews often empty my wallet. Yup, I ordered it right after finishing your review.

James, by chance I just finished Compliments of a Fiend this morning. I've read the first four Ed and Am Hunter books and aside from The Fabulous Clipjoint, I like this one the best. Also The Far Cry is like four bucks on Kindle.