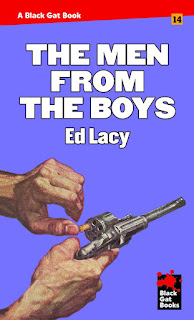 Over the years I’ve found Ed Lacy (real name Leonard Zinberg) to be a pretty dependable hardboiled/noir author. Some of his books I like less than others because he lets too much of his politics seep into them, but most of them are good, tough, fast-paced yarns about characters who aren’t necessarily sympathetic, but by golly, the reader winds up rooting for them anyway.

That’s certainly the case in THE MEN FROM THE BOYS, a novel published in hardcover by Dutton in 1956, reprinted by Pocket Books in 1957, and soon to be available again from Stark House in their fine Black Gat Books line. The narrator/protagonist is Marty Bond, a disgraced former cop who’s been reduced to working as the house detective in a sleazy hot-sheet hotel in New York City. He’s battling health problems, too, and discovers that he may have cancer. You’d think we would feel a little sorry for a sad sack like that, but Lacy makes it difficult to like Marty: he’s a drunk, a racist, was corrupt when he was a cop and is still on the shady side, and he treats everybody like crap. 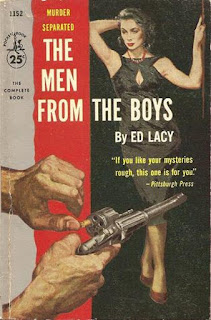 But then his stepson, who’s an auxiliary cop and wants to work his way up to being the real thing, comes to see Marty and tells him about a big case he’s stumbled on. Marty thinks the kid is nuts for wanting to poke his nose into something that’s none of his business and tells him so. But then the kid gets beaten up and nearly killed, and Marty is mad enough about that he decides to look into the case himself, maybe get vengeance for what happened to his stepson and crack one last big case before the cancer in his gut kills him.

As you probably can tell, this novel borders on nasty at times (but in a good way), and unlikable though he is, you really want Marty Bond to get to the bottom of things and deliver justice to the bad guys. Now, if you’ve read more than a dozen mystery novels in your life, you’ll see all the big twists in the plot coming from far, far away, but that doesn’t really matter all that much. Lacy kept me flipping the pages through the sheer raw power of the prose and the great character of Marty Bond. I thoroughly enjoyed THE MEN FROM THE BOYS. Lacy takes us on a walk down some ugly streets and does a fine job of it.

Maybe it's because my Dad took me to see Fistful of Dollars when I was seven years old, but I can't get enough of stories in which the protagonist is a dangerous, less than sympathetic character whose chief claim to 'heroism' is that he or she is willing and able to upset the plans of even more reprehensible characters.
Never read any Lacy, but this book sounds great. Keep the Black Gat titles coming, Stark House!

I read this one years ago and liked it a lot.

Second week in a row that you're twinning with George Kelley...

Hard to argue with.

Have several of Lacy's books and like them a lot.