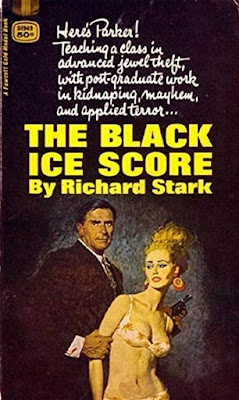 I imagine many of you are long-time fans of Donald E. Westlake’s Parker novels, written under the Richard Stark pseudonym. I’ve only read about half the series but read one often enough that I plan to get around to all of them eventually. I just read one I’d never read before, THE BLACK ICE SCORE, published as a paperback original by Gold Medal in 1968 (the edition I read).

In this one, Parker and his girlfriend Claire are in New York on a shopping trip when three men break into their hotel room and try to warn Parker off from a job they seem to believe he’s taken. This is not the way to get on Parker’s good side, of course. Bad guys never seem to learn: don’t go after Doc Savage because you think he’s going to interfere with your plans. That holds true for Parker, too.

More guys show up later and turn out to be the ones the first group was worried about. They’re from the African nation of Dhaba (to quote Woody Allen’s WHAT UP, TIGER LILY, a fictional but real-sounding country) and they want Parker to teach them how to steal a bunch of diamonds that the country’s strongman dictator has smuggled into New York because he’s planning on abandoning the country. This bunch wants their guy to replace the soon-to-be-absconding dictator. The other bunch supports a rival strongman. Parker is just intrigued enough to take on the job of teaching how to pull off a diamond heist. But he’s not going to take part in the actual robbery.

How do you think that turns out?

Things always go wrong in these books, and THE BLACK ICE SCORE is no exception. Lots of stuff happens, and Parker deals with it in his usual badass manner.

To get a minor complaint out of the way, the fictional nation and the rival groups battling over who’s going to rule it give this plot a bit of a melodramatic feeling. It strikes me as very Sixties TV, as if Parker wandered into an episode of MISSION: IMPOSSIBLE or THE MAN FROM U.N.C.L.E. This sort of takes away from the air of hardboiled realism I’m used to in this series.

However, the writing is so good, so terse with not a word wasted, that THE BLACK ICE SCORE is a sheer joy to read anyway. Which leads me to another point: at 144 pages of average size type, plus the occasional blank page between chapters, I’d be surprised if this book is much more than 50,000 words. It might not even be quite that long. Most of today’s thrillers, if they had the exact same set-up, would be twice that long, with half a dozen plot detours and an extensive back-story on every character. It’s true that we don’t know much about some of the characters in this book . . . but we know enough.

Overall, I wouldn’t put THE BLACK ICE SCORE in the top rank of Parker (or Westlake) novels, but it’s still very good and I thoroughly enjoyed it. Enough so that I probably won’t wait as long to read another one.

(And a tip o’ the hat to Fred Blosser for this one.)
Posted by James Reasoner at 5:30 AM

I recently watched the Lee Marvin movie POINT BLANK, loosely based on THE HUNTER.

My favorite PARKER novel is SLAYGROUND. It took me a couple years back in the 1970s (pre-Internet) to find a copy of THE SOUR LEMON SCORE.

A movie was made of Slayground starring Peter Coyote as "Stone". It was not very good.