Forgotten Books: Private Eye Action As You Like It - Joe R. Lansdale and Lewis Shiner 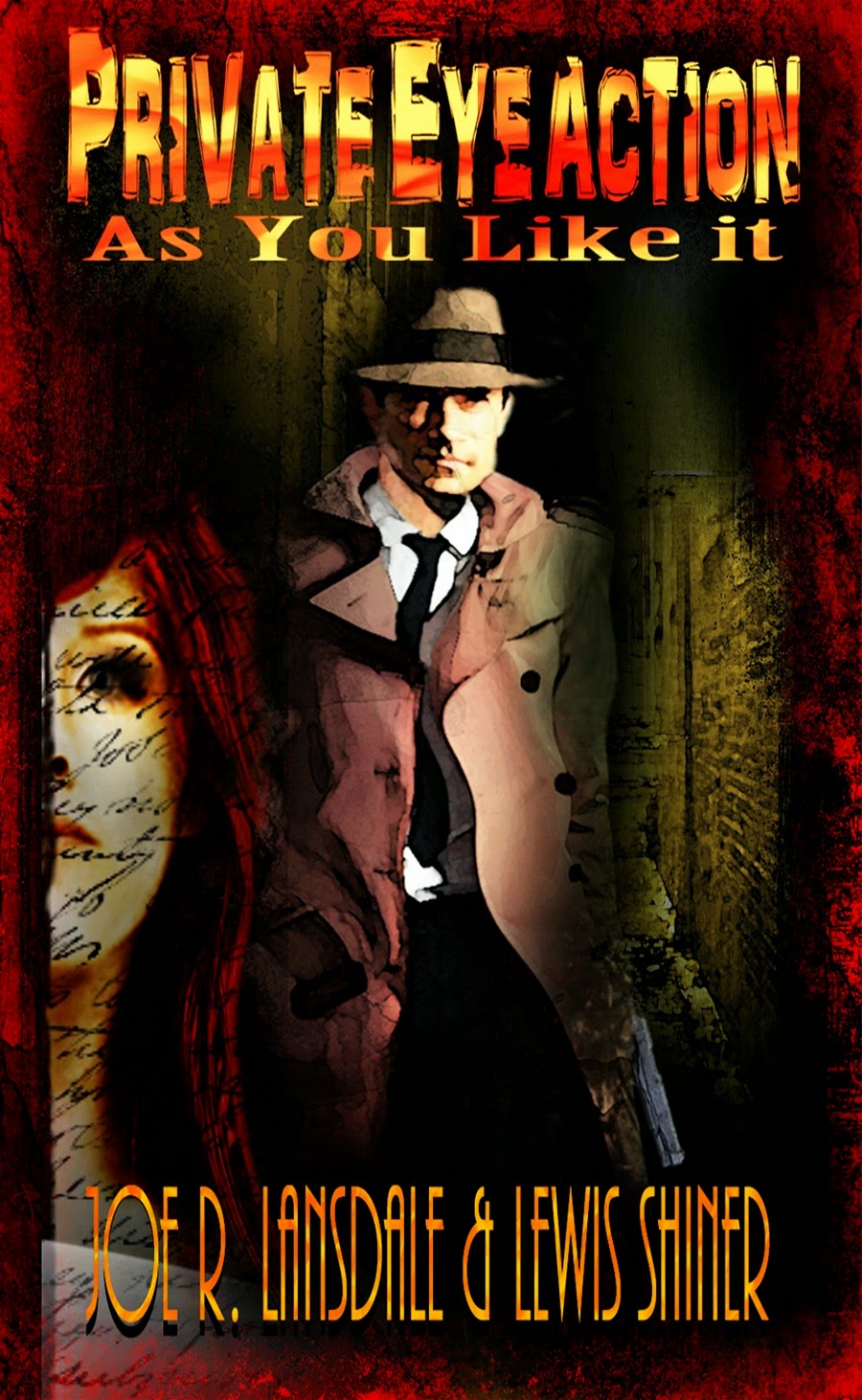 When Joe Lansdale mentioned on Facebook that an e-book edition of this collection was available, I knew I had to get it. My copy of the original edition is gone, and I wanted to read the introductions by Joe and Lew Shiner again. They're the best part of this book for me.

Not that the stories themselves aren't very good. They are. Some of my favorites, in fact. PRIVATE EYE ACTION AS YOU LIKE IT features three Ray Slater stories by Lansdale (including the first story he ever sold), three Dan Sloane stories by Shiner, and three John Talbot stories by both of them in collaboration. All of them except one were published originally in MIKE SHAYNE MYSTERY MAGAZINE—often in the same issues where I had stories appear.

That's what makes this book so great. It's a window back into another time, an era that in most ways is closer to the pulp days than it is to today, and not just time-wise. An era when stories were pecked out on manual typewriters, stuck in manila envelopes, and sent off through the mail to irascible old editors who'd been in the business for forty years, all in hopes of getting an acceptance and a check at the princely, pulp-like rate of a penny a word.

In his introduction, Joe writes about getting a rejection from Sam Merwin, Jr., the editor of MSMM, for a story that Joe had revised and submitted several times. When I read, "I get sicker of this story the more I see it. Try something new", I nodded and thought, yeah, that sounds exactly like Sam. What Joe doesn't mention is that the rejection was probably scrawled on a scrap of paper torn off of something else. I don't think I ever got any correspondence from Sam, rejection or acceptance, on anything resembling a letterhead. That was just the sort of hardscrabble magazine MSMM was.

But those of us who wrote for it formed a sort of fraternity, as Lew talks about in his introduction. We had half a dozen letters to other writers out in the mail all the time, an endless (or so it seemed then) circle of gossip, bitching, and encouragement. The lift in spirits that came whenever I opened the mailbox and found a letter from Nacogdoches or Austin or Brownwood or Durango was a tangible part of what kept me going through those days of pounding out stories and collecting rejection slips or the occasional check for $15 or $25 or even, happy day!, $40 or $50. Groceries this week, baby!

As I've said before about other things, man, I wouldn't go back to those days...but I'm awfully glad I lived through them.

So, I haven't said much about the actual book. It's great. The stories are wonderfully entertaining, classic private eye yarns that were like nothing else being published at that time, and you can see the genesis of both writers in them. I can't read them now without visualizing the covers of those issues of MSMM where they first appeared. I love 'em, simple as that. And PRIVATE EYE ACTION AS YOU LIKE IT is one of the best time machines you'll ever find. If you've never read it, do yourself a favor and grab a copy right away.
Posted by James Reasoner at 5:30 AM

I miss the old days.

I have always been curious how you lightly-published writers without agents found each other to correspond back in the stamp-and-envelope days.

I read this one several year's ago and I'm glad it's now available as an e-Book. It deserves a wider audience.

Dan, in my case I met Joe and Bill Crider through a hardboiled private eye fanzine called THE NOT SO PRIVATE EYE. It had a letters column and printed the addresses of people who wrote in, and when I saw letters from a couple of guys in Texas who liked to read the same sort of stuff I did, I wrote to them, introduced myself, and started friendships that last to this day. That was in '78, I'd say. Maybe '77. Hard to be sure after all this time. I met Lew through Joe. I believe I met Steve Mertz through the fanzine, too, although I may have gotten his address from one of the other guys. I like the term "stamp-and-envelope days". It does sound sort of quaint, doesn't it, sort of like Larry McMurtry's novel TELEGRAPH DAYS.

I remember THE NOT SO PRIVATE EYE. I still my issues around somewhere.

I'd like to see a book about Sam Merwin and his influence as an editor. He was responsible for making STARTLING STORIES and THRILLING WONDER into adult SF magazines. He worked for GALAXY as an assistant to H.L. Gold and he was editor for MIKE SHAYNE.

I hadn't heard of this one. Just ordered it, although I've no idea when I can fit it in.

James, I'll have to find a hard copy of this. I enjoyed Joe and Lew's P.I. stories in MSMM. I used to get the same kind of comments from Cylvia Kleinman, just scrawled on a slip of paper. Nothing quite as bad as "I'm sick of this," but certainly "This almost made it, keep trying." And I remember the Not So Private Eye very well. I might have met all you guys through that, or The Armchair Detective.

I've still got a rejection from Sam Merwin--on a torn scrap of paper from a story I submitted in 1978. Never rewrote the story. He told me it was "a near miss." I should have rewritten it, but I was 20 and rejection hit a lot harder back then.

Excellent reminiscences. I'm sorry I never tumbled to THE NOT SO PRIVATE EYE...1978 was the first year I read the newly retitled STARSHIP (formerly ALGOL) and SCIENCE FICTION REVIEW...but wouldn't discover THE ARMCHAIR DETECTIVE for another couple of years...and MSMM was a little more spottily distributed in Honolulu in '79 than it had been in New Hampshire in '78.

I not only remember TNSPE but Dave Lewis and I collaborated on an article for it. This would have been in the mid-1980s.

Thanks for the reminiscences. I'm not surprised other writers got those scrap paper rejections from MSMM. I think the magazine was always barely hanging on. I've heard that when Dennis Lynds was writing all the Shayne novellas, Leo Margulies was always 'way behind on paying him.

Walker, I'd love to see a book about Merwin, too. He's really an underrated figure in pulp and digest history. I'm not the one to write it, but I'd sure read it.

Todd, I started reading STARSHIP about '78, too. Bought it at the Century Bookstore on the west side of Fort Worth, which was the only place that carried small press magazines and even some fanzines. I recall really enjoying it.

Cap'n, didn't Dave reprint that article from TNSPE on his blog? Or is my memory playing tricks on me again. I had a complete collection of it at one time, so I know I read it.

Great to read all of these comments. I never knew this kind of fan magazine existed back then. This also probably explains how I ended up reading so many of the writers mentioned in the comments one-after-another.