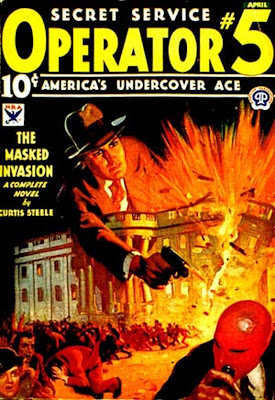 It occurred to me recently that big thrillers by authors such as Brad Thor and the late Vince Flynn featuring valiant American intelligence agents fighting apocalyptic threats to the country are just updated versions of the pulp novels starring Jimmy Christopher, Operator #5, America's Undercover Ace. The biggest difference is that Jimmy Christopher dealt with those threats at a faster pace and in about half the wordage of today's overlong thrillers.

I'm a long-time fan of the Operator #5 series. I've written before about discovering the Corinth paperback reprint of one of the novels, LEGIONS OF THE DEATH MASTER, on the spinner rack at Trammell's Grocery Store in the mid-Sixties and being won over instantly. Since Radio Archives is in the process of reprinting the whole series as e-books, I decided to start from the first and read the whole thing. It'll probably take me a while.

The Operator #5 novels were written at first by Frederick C. Davis under the house-name Curtis Steele. Later on Davis would be replaced by Emile Tepperman and Wayne Rogers. But the debut novel in the April 1934 issue, THE MASKED INVASION, is by Davis and was written to order because publisher Harry Steeger and editor Rogers Terrill already had the cover painting they wanted to use, which showed the White House being blown up.

From that germ of an idea, Davis spins a wild but compelling yarn about a masked supercriminal known as the Red Master using a new invention to cause all electrical activity to stop in New York City, resulting in massive blackouts that plunge the great metropolis into chaos. (This same gimmick was used in a number of pulp novels, including the Shadow tale THE BLACK HUSH.) When the range of this superscientific menace expands, it threatens the whole country, which is primed to be taken over by an invasion fleet during the Thirteenth Darkness. Only one man has a chance to stop this catastrophe . . . Jimmy Christopher, of course.

Despite his youth (he's in his early twenties), Jimmy Christopher is already the top intelligence agent in the country. As Will Murray points out in his introduction to the e-book edition, Jimmy Christopher is the typical clean-cut, square-jawed, G-man hero of the era. He's also an amateur magician and will stop in the middle of the action to perform a trick and explain it to his young sidekick Tim Donovan. He has a little charm shaped like a skull attached to his watch chain, and inside it is a deadly gas. He also carries a rapier in a sheath hidden inside his belt. He even has a secret identity, that of society photographer Carleton Victor, although it doesn't come into play much in this novel. Davis also establishes the tradition of always referring to him by both names, Jimmy Christopher. It's an odd stylistic touch, but it works.

His boss and the head of the unnamed intelligence agency for which he works is known only as Z-7. In addition to Tim Donovan, Jimmy Christopher is helped out sometimes by his father, a retired intelligence operative who has to be careful because a bullet is lodged near his heart, and his twin sister Nan, who sometimes masquerades as him. That's one of the weaker points in this series, in my opinion, but hey, unreasonably effective disguises are a pulp tradition, after all, so we'll cut Davis some slack on that.

As the dreaded Thirteenth Darkness approaches, Davis does a fine job of piling more and more trouble on Jimmy Christopher's head until it looks like there's no way he or the country can survive. And yet, in a great action-filled set piece that occupies the last fourth of the book, Jimmy Christopher finds a way to triumph. The last time I read this story was about 35 years ago, but I still remembered the wild climax and it was just as effective this time around. If this was a movie, some of the stunts involved would be right at home in a modern-day action summer blockbuster.

Despite the over-the-top apocalyptic plots and the occasional touches of pulp silliness, Davis somehow makes his Operator #5 stories at least a little believable. As much as I enjoy Norvell Page's crazed tales of The Spider, I have trouble completely suspending my disbelief when I read them. Davis's Operator #5 novels have that same hysterical edge, but they contain a touch of plausibility that the Spider novels don't. At times they're almost eerily predictive of our political situation now, nearly eighty years after they were written. 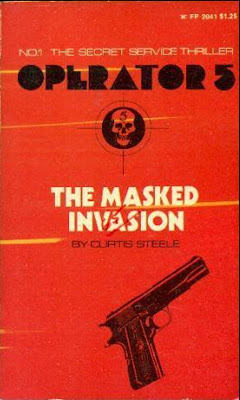 After being published originally in the April 1934 issue of the pulp, as noted above, THE MASKED INVASION was reprinted by Corinth in the Sixties (couldn't find a scan of that cover) and a short-lived outfit called Freeway Press in the Seventies. There was a more recent reprint from Wildside Press that's probably still available, plus the Radio Archives e-book edition. So it's not really a forgotten book, but I'm including it here anyway because readers of contemporary thrillers who haven't heard of the Operator #5 series might find something to enjoy in Jimmy Christopher's adventures. As for me, I love 'em, and I'm looking forward to reading more. 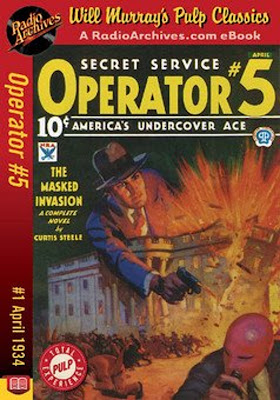 You're right about Vince Flynn's thrillers being an updated version of OPERATOR 5. I need to go back and read more OPERATOR 5 and appreciate the origins.

Wow, great to see a pulpy classic like this available as a reasonably priced ebook. I just bought #1, and I'm going to start it over lunch. Looks like great fun.

Great review, but I'm probably most excited about that Radio Archives link. Great deals on some great stuff. I'm going on a spree.

I'm a big fan of Davis straight mystery stories both in the pulps and the long list of novels (beginning in the late Thirties and stretching till the late Sixties I believe; maybe even a few in the Seventies) that he did for the old Crime Club.

A few years ago I met Karen Cunningham, who is Fred Davis' granddaughter. She returns each year to gather in pulps that Fred Davis appeared in.

She was wearing the coolest pulp t-shirt that I've ever seen and I've seen them all. This one had a photo of Fred Davis on the front with some of his pulps and a listing of dozens of his appearances on the back. I raved about it so much that the next year she gave it to me as a gift. I wear it as a good luck charm each year at PulpFest.

I need to read Davis's Moon Man stories that were in TEN DETECTIVE ACES (I think).

James, Moonstone Books is releasing a new OPERATOR 5 anthology later this year that tips it hat to the Purple Invasion series. I'm one of the happy writers who contributed a story.

Thanks for that heads-up, Ron. I'll be on the lookout for it.