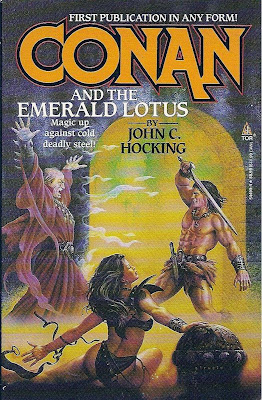 As a long-time reader and fan of Robert E. Howard's work, a former member of REHupa, and somebody who has written introductions for several volumes of Howard stories, you might expect me to be a strict purist, somebody who doesn't like pastiches featuring Howard's characters and doesn't think such things should be written. Ah, but that would be rather hypocritical of me, considering how the majority of my career has been spent writing about other people's characters, including my own Howard pastiche (the El Borak story "Wolves of the Mountain" in CROSS PLAINS UNIVERSE).

So, as with most things, I come down pretty much in the middle on this issue. I have no philosophical objections to pastiches, it's just that most of the ones I've read based on Howard's work aren't very good.

For years, though, I've been meaning to read John C. Hocking's novel CONAN AND THE EMERALD LOTUS, which has a pretty favorable reputation even among Howard's most devoted fans. I believe it was Morgan Holmes who first told me that Hocking's book is the best of the Conan pastiches published by Tor. I should have gotten around to it long before now, especially since the author comments from time to time on this very blog. All I can say is that I'm sorry for my procrastination on several levels, the most important of which is that it kept me from reading an excellent novel until now.

CONAN AND THE EMERALD LOTUS is a rare thing, a fantasy novel with a strongly realistic tone to it. Sure, there's plenty of swordplay and sorcery, but the tale revolves around a powerful, highly addictive drug, the sort of plot element you might find in a hardboiled crime novel. It's been said that Howard merged a hardboiled voice with horror fiction to create sword-and-sorcery, and Hocking understands that even though he doesn't try to imitate Howard's style. He spins this yarn in brisk, action-packed prose with occasional touches of creepiness and dark humor. Conan, aligned with one of the sorcerers warring over the potent powder known as the Emerald Lotus, is the most admirable character in the novel, and we know what a bad-ass he is.

At the same time, Hocking gives us the sort of spectacle you expect to find in epic heroic fantasy, especially in scenes like the description of sorcerer Ethram-Fal's stronghold in the badlands of ancient Stygia. And speaking of badlands, there are hints of the Western here, too, in the battles between Conan and his enemies in rugged terrain that might well be Monument Valley, Utah. All of it leads up to an apocalyptic and very satisfying climax.

As it turns out, CONAN AND THE EMERALD LOTUS is one of the most purely entertaining books I've read all year. Hocking knows his stuff and knows how to tell a fine story. I had such a good time with this I'm actually tempted to read some of the other Conan pastiches. But that might not be such a good idea, since I have a pretty strong hunch I've already read the best of them.
Posted by James Reasoner at 5:30 AM

I put Emerald Lotus in my top three Conan pastiches, along with Karl Edward Wagner's Road of Kings and Poul Anderson's Conan the Rebel.

Many thanks for the (more than) kind words, James. Means a great deal coming from you.

Charles: You put my book in exalted company. Honestly, I don't think it can stand the comparison, but thanks.

Evan: For a short, and memorable, time back in 1996 it looked as if I might be allowed to write a chain of Conan novels.
I finished the second, got a good distance through a third, and planned out three more. It was to be a six novel arc about the Cimmerian as a mercenary in Shem. A lot of fannish ambition there, but it was not to be.

The drug element sounds neat. I didn't know that the Conan books were compared to the hardboiled stuff. You may have just changed my whole outlook on them.

Robert E. Howard's Conan was to most fantasy what Dasheill Hammett was to Agatha Christie. Later, one of the John Maddox Roberts pastiches even lifts elements from The Maltese Falcon and Red Harvest.

Which book is that, Charles? Sounds like a good one for the reading stack.

It was Conan the Rogue, Evan.

Well now, I have this book but have never read it. I started through the pastiches and read quite a few before burning out. Then I put the rest away in a box, I think. I will have to see if I can dig this one out of the box it's in and have a read.