Gunshots in Another Room: The Forgotten Life of Dan J. Marlowe - Charles Kelly 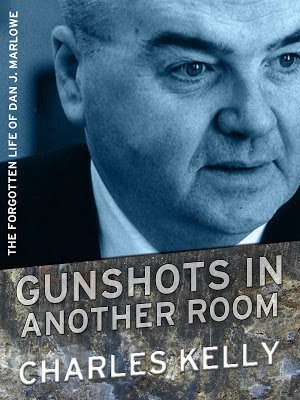 I knew when I first heard about this book that I'd want to read it. I've read only a few books by Dan J. Marlowe, but two of them, THE NAME OF THE GAME IS DEATH and ONE ENDLESS HOUR, are among the best hardboiled crime novels I've ever read. Also, I nearly always enjoy biographies of writers, especially the ones that have a lot of behind-the-scenes stuff about writing in them.

I also didn't know that Marlowe collaborated to such a large extent with William C. Odell. I knew Odell's name was on one of Marlowe's novels as co-author but had no idea that Odell also contributed to at least a dozen more. Nor did I know that Odell wrote three of the Nick Carter novels on his own. I don't think I've read those three books, but I'm not sure.

GUNSHOTS IN ANOTHER ROOM also contains a lot of information about Marlowe's other collaborator, bank robber Al Nussbaum, including a rundown of Nussbaum's criminal career, and the most complete portrait yet of Marlowe's medical problems which led to a bout of amnesia that sidetracked his writing career for a number of years. It's all fascinating stuff and very well-written with a novelistic flair by Kelly, a crime novelist himself in addition to his career in journalism. All of it adds up to make GUNSHOTS IN ANOTHER ROOM a fascinating book and definitely one of the best things I've read this year. Highly recommended. Available in both print and e-book editions.

I also like to read biographies about writers especially men who wrote during the pulp or vintage paperback periods. I've also noticed that many did not make a good living while writing, even though now we consider them successful authors.

Another example is Philip K. Dick. He was very prolific but there were periods when he was just about stone broke with not much to eat.

I've ordered this biography from amazon.com and I'm looking forward to reading it.

I'm fond of writer biographies, as well. There is a book about Craig Rice and a book about Fredric Brown I want to get around to buying one of these days. I'll have to add the Marlowe book to the list. Sounds fascinating. Great review!

Odell's Nick Carters haven't been a secret, but I guess there's not much info about the man - unless in this book, which I'll definitely be reading.

Brian, I have the Craig Rice bio but haven't read it yet. Didn't know there was one about Frederic Brown. I'll have to look into that.

Juri, there's more about Odell in this book than I've ever come across before, including a photo of him. I'd seen his name on the list of Nick Carter authors, just never connected it with the guy who shared the by-line with Marlowe on that one novel.

James, thanks so much for the review. The biography was a real labor of love for me. Something about Marlowe's writing captured me from the first time I read The Name of the Game is Death, and I always wanted to write about his life. Once I discovered his life was a true mystery, I was hooked. By the way, I always thought Mike Shayne was a terrific hardboiled private eye character, as good as they came, but it looks like you have the inside track on doing the bio of Brett Halliday.

Charles, thanks for the comment. I sure enjoyed the book. I know quite a bit about the Mike Shayne character and the history of the novels and the magazine but very little about Davis Dresser's life. I think it would take somebody more skilled at digging up facts than I am to write a decent bio of him. He'd be a good subject for one, though. I'd be glad to give a helping hand to anybody who wanted to tackle such a project.

I ordered this from Amazon a week or so ago and am still waiting for it to ship...can't wait for it to arrive.

Rittster, the Brown book, MARTIANS AND MISPLACED CLUES, is a terrific book and highly recommended.

Started reading this this morning -- really enjoying it so far.

The Craig Rice biography is very interesting. I've wanted to read the Fredric Brown one for a while, but haven't yet.

Have to read this one. I took a class from Al Nussbaum once - a fascinating character himself. Am ordering right now!

James, I'll have to decide what my next project will be: novel or bio, but I loved doing this bio so much I may go with another one. And if I do, I'll certainly consider Davis Dresser, along with, possibly, Gil Brewer and a couple of others. By the way, while it's not a full-length bio, Boris Dralyuk is doing an extended intro on the enigmatic Paul Cain, author of Fast One, for an updated collection of Cain's work. Boris is the former Noir Editor for the Los Angeles Review of Books, and he found some very cool stuff on Cain.

A Gil Brewer bio would be fantastic...I do hope you'll continue to give that idea consideration.

Ron, Gil Brewer will definitely be on my radar. The lives of these guys who wrote so well but had it so rough are fascinating to me. I'm hoping with outlets like Los Angeles Review of Books and Noir Magazine that we'll hear more about a bunch of them.