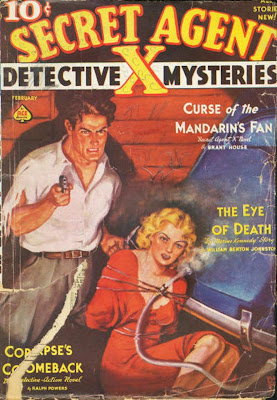 Secret Agent X, on the trail of crime as always, finds himself away from his usual surroundings in this novel from the February 1938 issue of the pulp magazine bearing his name. As the story opens, he's in San Francisco, trying to track down a Chinese criminal mastermind known as Chang, who has taken over the drug trade in that city. Chang, whose description is suspiciously reminiscent of Fu Manchu, sends warnings to his enemies in the form of curses written in delicate Chinese fans, hence the title of the story.
Since X is away from his usual stomping grounds, he doesn't have the help of his supporting cast such as Betty Dale and Harvey Bates, none of whom appear or even mentioned in this novel. He does wind up getting a hand from a different beautiful blond reporter who's very much like Betty, and there's a federal narcotics agent who sort of fills in for Bates. X spends most of the novel masquerading as crime-busting reporter Lon Hunter.
G.T. Fleming-Roberts is thought to be the author of this story, and the humor, the hardboiled rat-a-tat-tat prose, and the fact that it's a gangland story, rather than a super-criminal out to take over the world yarn, all support that theory. Some people also believe that it was written originally not as a Secret Agent X novel but rather as a non-series detective yarn featuring Lon Hunter as the hero, which was then hurriedly rewritten (probably by Fleming-Roberts) into a Secret Agent X entry. That seems plausible to me. We'll probably never know for sure.
No matter what its origins, "Curse of the Mandarin's Fan" is a fast-paced, entertaining story with some nice twists in the plot. A super-weapon does show up eventually, but it's almost an afterthought. Most of the story is spent on tough guy action scenes and politically incorrect, Yellow Peril-style shenanigans. There's a fairly strong mystery element, too, as the clues to the villain's true identity are scattered throughout the story. The solution does depend on some pretty obscure knowledge that the Agent happens to have, but at least the author attempts to give the reader a fair-play mystery along with the breakneck action.
An inexpensive reprint edition of this one is in the works from our friends at Beb Books. Whether it started out as a Secret Agent X novel or not, it's an entertaining entry in the series and well worth reading if you're a fan of the character.
Posted by James Reasoner at 6:00 AM

SECRET AGENT X is one of the few hero pulps that I find readable. I notice that there is some damage to the lower left corner of the cover. I've been bidding on the Frank Robinson Pulp Auction which is mainly in fine condition, so such a defect sort of shocks me back into the real world of pulp magazine condition.

Thanks for the heads-up on Beb Books! I'll be doing some business with them soon.