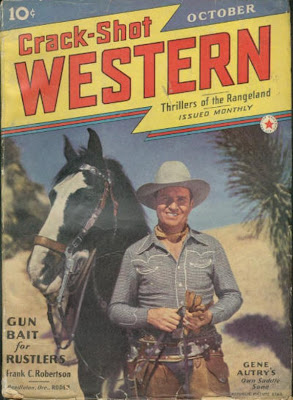 Western pulps sported photo covers from time to time, as you can see from this example, the first such I've run here. I'm not a huge Gene Autry fan -- when it comes to singing cowboys, I think Roy Rogers has Gene beat, hands down -- but I generally enjoy his movies. I can't complain about the authors in this issue of CRACK-SHOT WESTERN, either: Frank C. Robertson, Paul S. Powers, L.P. Holmes, Claude Rister, and Lloyd Eric Reeve. This isn't a particularly well-known Western pulp, so it must not have been very successful, which might mean that having Gene Autry on the cover was an effort to boost sales.
Posted by James Reasoner at 7:00 AM

CRACK SHOT WESTERN only lasted 9 issues, 1939-1941 and was just about the last gasp of the Frank Munsey Company, as far as new pulps. All their pulp titles were sold to Popular Publications in 1942, the main one being ARGOSY.

I still have many of the cancelled checks showing payment to the authors and artists. Munsey kept all their checks and when Popular bought Munsey, they inherited all the old checks and correspondence also. I bought a box full of Munsey and Popular checks at a Pulpcon 30 years ago.

We used to laugh at Gene trying to stay on a horse, too. When it came to riding, Roy had him beat there also. But Gene made the money.Poor Roy struggled under his contracts while Gene made millions.

Roy had his pleasures, though (and not all of them savory). And it's amusing (to me, anyway) to think of other popular culture folks who were more cowboy in the real sense than Autry or Rogers ever were...the young Dave Brubeck, for example.

I was going to say, the cover-logo's similarity to that of FAMOUS FANTASTIC MYSTERIES and FANTASTIC NOVELS (initially Munsey titles) was hard to miss.

Todd,
I knew it was a Munsey title because of the red star, but I missed that logo resemblance. You're absolutely right, though, looks like they borrowed the design from those other two titles.

Brubeck was a cowboy? I love his music but don't know anything about his life.

James, I love your blog. I really enjoy your Saturday morning Western post. I sure hope you keep them coming. I have 1 issue of Crack-Shot Western (October 1940 issue) featuring the (Fred Faust)Max Brand novel "The Longhorn Feud" from what I've seen of the other issues, most had stories by Faust in them under his Max Brand or Evan Evans pen-name.