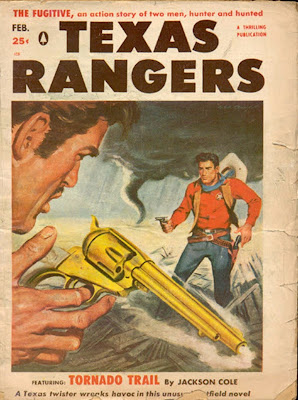 This is the final issue of TEXAS RANGERS, containing the Jim Hatfield novel "Tornado Trail", by Walker A. Tompkins writing as Jackson Cole. Other than the fact that there's no ad for the next issue's novel, there's no indication that this is the last issue of the magazine. The Hatfield novel is an excellent one, a very suspenseful tale that takes place in a much shorter span of time (about a day and a half) than most of the Hatfield stories. This one concerns Hatfield's attempt to corral an outlaw gang that has gotten away with a half-million dollars in loot from a train holdup. Hatfield has the added problem of an inept Ranger trainee tagging along with him. There are plenty of unexpected twists in the plot and well-written, atmospheric scenes, and the only real complaint I have has nothing to do with the story itself -- early on, one of the illustrations is based on a scene that comes much later in the story, and it gives away an important development. I've seen that happen in other pulps from the Thrilling Group, most notably THE PHANTOM DETECTIVE and G-MEN.
Rounding out the issue are four short stories:
"Two Kinds of Guns", Bart Morgan
"Bandit Breed", T.V. Olsen
"The Fugitive", Philip Morgan
"Trouble Wanted", Lucas Todd
Surprisingly, all of the short stories are pretty good. I expected that from Olsen, but I'd never heard of any of the other authors. "The Fugitive" is a simple but well-written story about a lawman's long pursuit of an outlaw, while "Trouble Wanted" concerns a rancher's efforts to keep his younger brother from being hanged for a murder he didn't commit. In both cases, old plots but handled very well.
All in all, this issue is a case of saving one of the best for last.
Posted by James Reasoner at 7:00 AM

This issue was almost the last of the pulps because most titles died in the early 1950s with a few SF magazines making it to 1955. I remember SCIENCE FICTION QUARTERLY lasting longer than the others. RANCH ROMANCES made it into the early 1970's.

Walker,
I remember seeing new issues of RANCH ROMANCES on the stands in its last years. Of course I didn't ever buy any of them, not being interested in romance magazines and not realizing its history. Now I have quite a few of the issues from that era, when it was mostly and then all reprint. Some good stories in there, though!