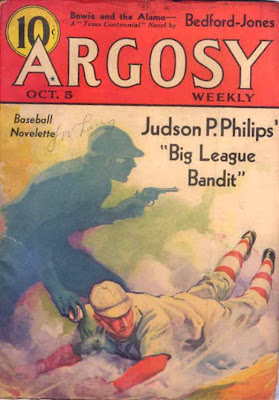 The next couple of weeks I'm going to be taking a look at a couple of historical novels by one of my favorite pulp authors, H. Bedford-Jones, that were serialized in the pulp ARGOSY but never reprinted in book form, as far as I know. This is something that should be remedied.

Growing up in as I did, I was also steeped in history, including all the lore and legends. I've always been particularly fond of reading about the period during the 1830s in which won its independence from and especially interested in the siege and battle of the . I've been to the Alamo many times, have seen the bullet-pocked walls of the famous chapel, walked through the hushed hallway of the long barracks. What's left is surprisingly small, but the feeling one gets from a visit there is still quite powerful.
So when I ran across this serial by H. Bedford-Jones called "Bowie Knife", proclaimed on the cover as "a Texas Centennial novel of and the ", I knew this was my meat. I wasn't disappointed.
The hero of "Bowie Knife" is Hugh Kenly, a former riverboatman who is in disgrace because the boat he was piloting hit a snag in the Mississippi and sank when its boiler exploded. In New Orleans, Kenly is trying to decide what to do with the rest of his life when he meets Davy Crockett and Jim Bowie, who are gathering up men to go with them to the Mexican state of Texas, which is in turmoil because of the heavy-handed policies of Mexico's dictator, General Santa Anna. Kenly tentatively decides to accompany them, but before that can happen, he gets embroiled with a couple of Mexicans who are also in New Orleans recruiting men for Santa Anna's government, to help put down what seems to be a brewing revolution. These two are Don Rodrigo and the beautiful Senorita Conchita. When Kenly rescues Conchita from some men who are attacking her, he accidentally kills a bystander who rushes up. This bystander is the famous Jim Bowie, and Kenly winds up with 's equally famous knife.
About now the reader is thinking that Bedford-Jones is really taking some liberties with history, but not to worry. It quickly becomes obvious that Kenly only believes to be dead. He's really still alive, of course. But in fleeing from what he thinks is a murder charge, Kenly winds up going to Texas with Don Rodrigo and Senorita Conchita, who is really a noblewoman named Dona Maria. The year is 1835, and the town of San Antonio de Bexar is full of intrigue, political maneuvering, and double-crosses. Kenly is in the thick of it, important to more than one faction because he has a map that supposedly leads to the lost San Saba silver mines of Jim Bowie. There is a short-lived romantic triangle between Kenly, Dona Maria, and Josefa, the sister of Kenly's friend Pablo. Bedford-Jones sends his characters on an expedition to the San Saba mines, which leads to a battle with the Comanches and their war chief El Lobo Rojo, or Red Wolf. Back in , Kenly crosses paths with Santa Anna and his brother-in-law General Cos, the commander of the Mexican military garrison there. Ultimately, in what comes as no surprise to the reader, Kenly winds up on the side of the Texans and warns them to retreat to the as Santa Anna approaches the city with a large army. Kenly goes with them, and so does Josefa.
Part of the problem with writing historical fiction about well-known events is that the reader is often all too aware of the outcome. We know that the Alamo is going to fall and that its defenders will be killed to the last man. Bedford-Jones, though, so skillfully manipulates the reader's hopes and feelings that we experience the same air of uncertainty that must have gripped the men inside the Alamo. He paints vivid pictures of the historical characters, especially Crockett, who rings true in every scene. Jim Bowie is a bit less sympathetic than we've come to expect from other portrayals over the years but still fully believable. In fact, Bedford-Jones stays pretty close to the facts as we know them, omitting the famous "line in the sand" incident (which may or may not have really happened) and dodging the question of whether Crockett surrendered and was later executed or died fighting (which is the version I believe; I don't care what the historical revisionists say).
As always in Bedford-Jones' work, the style is clean and sparsely worded, though with plenty of action and deftly sketched characterization. I've heard his writing described as "cool intellectualism", and that's pretty close to accurate as far as I'm concerned. People who think of all pulp writing as melodramatic and wildly overblown have never read Bedford-Jones. Maybe it's because the subject matter is close to my heart, but I think this is one of his best novels.
Posted by James Reasoner at 6:00 AM

James, has this been anthologized, do you know?

Pete, as far as I know the ARGOSY serial is its one and only appearance.

BLACK DOG has reprinted some of Bedford-Jones' works. But not this one...yet.

Sounds like a write-in campaign to BLACK DOG asking them to reprint this one is in order.

I'd love to read this.

H. Bedford-Jones has been called King of the Pulps and this is another example why he earned the title. I have the issues and will have to read the serial. Thanks for this review, James.

Wow! This one sounds great and I've only got one segment. Time to watch eBay. James, is there any relationship between "Bowie Knife" and Bedfor-Jones' serial the following year in Argosy "Texas Shall Be Free!"?

H. Bedford Jones is so good that it is hard to name a favorite but THE STAR WOMAN (1924) made up of two long stories in Adventure ranks high with me.

Richard,
"Texas Shall Be Free!" is a sequel historically (it covers the rest of the Texas Revolution), but none of the fictional characters from "Bowie Knife" appear in it. It'll be next Friday's Forgotten Book for me.

One of his fair to middling ones - fast paced but wordy and boring as hell in parts.