When it comes to gangster movies, I've always been more of a Humphrey Bogart fan rather than a Jimmy Cagney fan. Of course, the two of them made several excellent films together, and it's not that I don't like Cagney's movies. I generally like 'em a lot. It's just that Bogart is one of my all-time favorites. 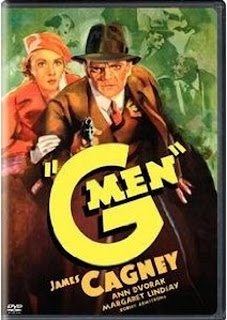 But I'll still watch Cagney any time, so when I recently came across a four-movie set of his films, only one of which I'd ever seen, I didn't hesitate to snap it up. The four movies are WHITE HEAT (the only one I'd seen, and it's a great, great film), CITY FOR CONQUEST, EACH DAWN I DIE, and "G" MEN. The first one of those I watched is "G" MEN.
From 1935, it's the earliest of the four movies in this set. Cagney plays Brick Davis, a young lawyer whose education was paid for by one of the local mobsters who wants to see the kid make good. The mobster insists that Brick play it straight instead of working for criminals like him, and Brick gives it a try, even though he's not really cut out for practicing law.
Then one of Brick's friends from law school who joined the Bureau of Investigation (the forerunner of the FBI) is murdered, and Brick's desire to avenge his buddy's death leads him to his true calling. He gives up practicing law and turns to enforcing it, becoming a G-Man.
From there we're off to the races, as Brick goes through training to be a federal agent and then helps track down his friend's killer. But that just opens up a larger investigation and an even more extensive war against crime that leads to kidnapping, heart-tugging drama, and shootouts galore. There's plenty of tommy gun action in this one.
"G" MEN's cast is full of standouts from 's Golden Age. Robert Armstrong and Lloyd Nolan are fellow agents, Barton MacLane is one of the gangsters, and even B-Western stalwart Raymond Hatton gets in on the action as a messenger working for the mob.
Not surprisingly, though, Cagney dominates the film. He was a genuine movie star, and no matter who else is in the scene or what's going on, the viewer is almost compelled to watch him. He doesn't ham it up, though, at least not too much, and is willing to let the other actors shine, too, which explains how he was able to work so well with other stars who possessed as much firepower as he did, such as Bogart in THE ROARING TWENTIES and others, and later, with Henry Fonda and Jack Lemmon in MISTER ROBERTS, also a great, great film.
"G" MEN probably doesn't belong in the top rank of Cagney's films; its script is a little too formulaic for that. But it's a solid middle-of-the-pack entry from his career, and as such, it's very well made and highly entertaining. I had a great time watching it.
One final note: as somebody who grew up watching old movies on local TV, which in those days meant a lot of scratchy, jumpy prints, I'm always amazed at how crisp and clean most of these films look on DVD. The photography in "G" MEN is top-notch, like just about everything else in the film.
Posted by James Reasoner at 6:00 AM

Haven't seen this one in many years.
My daughter always liked Cagney so I know we watched it.

And the hiss the old public-domain transfers tended to drown their soundtracks in. There was even a widely-distributed set shot on videotape from a projection setup with a hole in the screen...everything from PERSONA to CREATURE FROM THE HAUNTED SEA with that same little black spot in the corner...

Why do I predict the gangster's improbably noble impulse comes back to bite him? But Cagney, in his nervously energetic way, was indeed hard not to watch, and did play well off the relatively "cool" Bogart in what little I've seen of them together...

James is so right about the greatest of WHITE HEAT. Once you see Cagney scream "Top of the World Ma!", you can never forget the movie. Howabout the scene in the prison cafeteria when Cagney hears that his mom died while he was in jail. The rage and anger he feels explodes into a crazy riot scene.

Two more of my favorites appear in WHITE HEAT: Virginia Mayo who deserves more recognition as a star and Edmund O'Brien who seemed to specialize in playing noirish characters.

Walker,
I first saw WHITE HEAT on the big screen at a revival theater in the early Seventies. Talk about a movie making an impact! Now that I have a DVD copy I'm sure I'll watch it again sooner or later.

Like you, James, I prefer Bogart to Cagney, but will watch them both. Where did you get this set? I've not seen most of these.

Keith,
Sam's Club had the set for a while, but I procrastinated about getting it and then it was gone. Then a week or so later I found it at Half Price Books. They had several copies at the time. Amazon has it for $10.59, too.

Thanks. There's no Half Price in Lubbock, so I'll check Amazon.

I'm shocked there's no Half Price Books in Lubbock. Seems like a prime location.

I have always liked Cagney and his tough-guy films though I haven't seen this one. My favourite Cagney film, among the ones I have seen, is ANGELS WITH DIRTY FACES, particularly the last scene where he is dragged to the electric chair.

I love Bogart. I love Cagney. G-MEN was Warner Brothers' response to complaints about the level of violence in Cagney's gangster roles. Warners' strategy: Cagney can be tough, but needs to be on the side of the law, in other words.

I believe this film comes up in the recent J EDGAR as part of a move to deglamorize the mob in the movies. I like Cagney in these old films, but Bogart, who came to fame a decade later, has more of that Forties noir that goes with a fedora. Thanks.