Blood on the Mink - Robert Silverberg 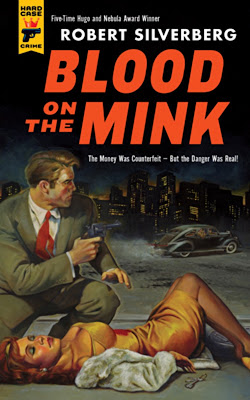 Charles Ardai and Hard Case Crime have given us another nearly lost treasure in BLOOD ON THE MINK, the only hardboiled crime novel by science fiction legend Robert Silverberg (unless there are more like this still hidden in the pages of the crime digests of the late Fifties and early Sixties, and we can only hope that's the case). This one was written for a magazine that went defunct before it could be published, but Silverberg sold it a couple of years later to one of his other markets, TRAPPED, where it appeared in the November 1962 issue under the pseudonym Ray McKensie. As Silverberg explains in his afterword to the novel, it turns out that was the final issue of TRAPPED, which is a shame because this novel could well have been the first of a series.

The narrator is a federal agent named Nick whose specialty is undercover work. In BLOOD ON THE MINK, he takes the place of a hood who comes to to make a West Coast distribution deal with a counterfeiting ring. Nick's real objective is to find the engraver who's responsible for the printing plates being used to turn out nearly perfect counterfeit bills. In order to do this he has to maintain his dangerous charade while several different factions vie to come to an agreement with the head of the counterfeiters.
Naturally, there are a couple of beautiful women involved, the mistress of the boss counterfeiter and the daughter of the engraver, and both dames wind up putting Nick in even more peril before the assignment is over. Fistfights, shootouts, and explosions punctuate the narrative, and Silverberg delivers it all in terse, fast-moving prose with a firm hand on the various strands of the plot.
Quite a few of Silverberg's erotic novels are crime yarns in disguise, but he's in full hardboiled mode in BLOOD ON THE MINK and I thought it was great. Like I said above, I wish there were more of these books 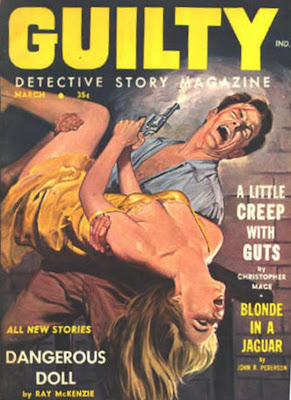 The Hard Case Crime edition sports a fine cover, as well as including a couple of Silverberg's equally excellent short stories from the crime digests, "Dangerous Doll", another story bylined Ray McKensie, from the March 1960 issue of GUILTY, and "One Night of Violence", originally published as by Dan Malcolm in the March 1959 issue of GUILTY. With a lot of Silverberg's early SF and some of his erotica back in print, it's time for some enterprising publisher to bring out a massive collection of his crime stories as well. I'd certainly buy it.
And speaking of buying, BLOOD ON THE MINK will be available in early April, but you can pre-order it now. If you like top-notch hardboiled crime novels as much as I do, I highly recommend you do so.
Posted by James Reasoner at 6:00 AM

Great review, James. I enjoyed reading it. Thanks. I tweeted it to my tweeps.

that is a sure sign for silverberg to stop writing crime novels!

heaven is telling him to stick to scifi.

hope that hard case will not follow the path of the 2 publishers.