(This post originally appeared in somewhat different form on June 19, 2006.) 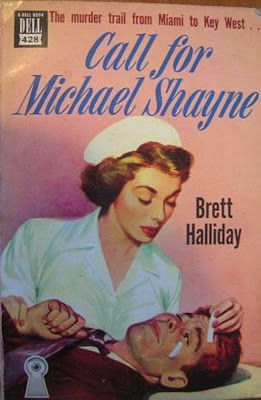 Some of you reading this may not know that in the early days of my writing career, more than twenty-five years ago, I was "Brett Halliday" for a while, penning more than three dozen short novels about private eye Michael Shayne for MIKE SHAYNE MYSTERY MAGAZINE. And I do mean penning -- most of my first drafts in those days were written in spiral notebooks with a fountain pen. I'd been reading the full-length Shayne novels for years and read a lot more of them after MSMM's editor, Sam Merwin Jr., asked me to try my hand at writing a Shayne story. So I have a great fondness for the series and have always considered it somewhat underrated by the critics. These days, of course, Mike Shayne is mostly forgotten. But not by me. I still read (or sometimes reread) one of the novels now and then.
From 1949, CALL FOR MICHAEL SHAYNE is one of the books I hadn't read until now. It's by Dresser, the creator of the series and the original Brett Halliday. It starts with a situation that's very familiar to readers of hardboiled mystery novels: Insurance executive Arthur Devlin wakes up in a seedy hotel room with no memory of where he's been or what he's done during the past two weeks. And oh, yeah, there's a dead body in the room, too, a weaselly-looking guy with his head bashed in by a blackjack. Instead of muddling through and finding out what's going on by himself, though, Devlin does the smart thing. He turns to Mike Shayne for help.
As always in a Shayne novel, there are plenty of twists and turns in the plot. Some of it is fairly easy to figure out, but there was one "D'oh!" moment near the end when I smacked my forehead and realized I should have made a certain connection a lot earlier. Dresser was a master at staying one or two or sometimes three jumps ahead of the reader.
There's no sign of Shayne's faithful secretary Lucy Hamilton in this one, or his reporter friend Tim Rourke, but Miami Chief of Police Will Gentry and Shayne's longtime adversary Peter Painter make appearances. The fact that all the action in the novel takes place in less than twenty-four hours just didn't leave room for Lucy or Rourke, I guess. The scenes where Shayne spars verbally with Painter are great fun, as usual.
CALL FOR MICHAEL SHAYNE belongs in the second or maybe even third tier of Shayne novels, but it's still very entertaining. The cover illustration above is from the Dell mapback edition and is probably by Robert Stanley. (I didn't look it up to be sure.)
Posted by James Reasoner at 7:00 AM

I've read a few Shayne novels and liked them but was not wowed by them. I'm wondering which ones you think are in the first tier. I'd love to check out the best ones.

Enojyed those stories in the 50's and 60's. A few years back I found a box of Mike Shaynes on ebay and won the bid. It was great fun going through that box. Found a few Shell Scott books thrown in. I was pleased with that win.

I like all the Shayne novels from the first ten years or so of the series, but some favorites are DIVIDEND ON DEATH (the first Shayne novel), THE CORPSE CAME CALLING, BODIES ARE WHERE YOU FIND THEM, TICKETS FOR DEATH, BLOOD ON THE BLACK MARKET, and MURDER IS MY BUSINESS (which was reprinted by Hard Case Crime, I believe). They're pretty dated, as you might expect, but if you can put yourself in a Forties frame of mind, they're also great fun.

In the late 1950s, I started reading Brett Halliday DELL paperbacks mostly because of the great McGinnis covers.

Those were some great covers, all right.

I don't know if you'll like to hear this James but I prefer your version of Michael Shayne to Halliday's. Your short novels were more exciting and realistic than his. And much better written.

I certainly appreciate that, Ed. I think maybe it's a generational thing, since Dresser started writing in the Thirties and his work always reflected that. Despite the few modern touches here and there, I always thought of my Shaynes as taking place in the late Fifties/early Sixties era (or some alternate universe approximation of that era, anyway).

By the way, I have a few more Fifties-set projects in the works, if I can find the time to write them one of these days.

I'm ready to read those new stories now, James.As I said your Shayne short novels were terrific. So were your short stories in the magazine. I believe I reprinted two or three of them to prove how much I liked them.

Thanks for a heads up on the ones to look for. After reading Ed Gorman's comments I'm wondering if your novelettes for the magazine will ever see the light of day again or are they stuck in some corporate copyright limbo?

I sold all rights to my Shayne stories, so if any of them were to appear again the deal would have to go through whoever controls the rights to Dresser's estate, I suppose. There were some good ones by Dennis Lynds that would be well worth reprinting, I think.

I have all the Michael Shayne books. When we lived in northern Manitoba in a town with no library or bookstore, the only place you could buy paperbacks was a tobacco store with a small news stand. My father always bought the Brett Halliday books along with Erle Stanley Gardner, George Harmon Coxe and A.A. Fair. That was what I grew up reading along with any sports book or magazine that I could get my hands on. For some reason, the Shayne books stayed in the family and ended up on a shelf at our family cottage. In recent years I went on a quest to find the missing ones in used bookstores and book and yard sales. Now that I have them, I look for older copies or ones with different covers to upgrade my collection. It's fun to take one of the books off my shelf and see my late father's name scrawled on the first page and remember him relaxing on the couch in our living room reading it.

Kent,
That's a great story and a great bunch of writers. I really need to read some more George Harmon Coxe. My favorite of his that I've read so far is THE JADE VENUS, a really nice post-WW2 Kent Murdock yarn about smuggling art treasures out of Europe.