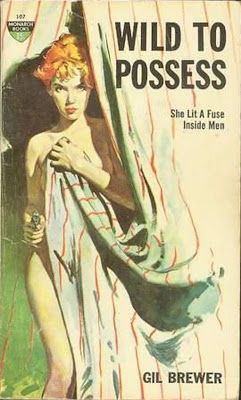 There's just something endlessly appealing about the noir formula: an unlucky protagonist, usually already in trouble of some sort, makes a bad decision and winds up in an even worse mess, and things just keep going wrong as he tries to dig himself out of the hole he's fallen into.
Gil Brewer plays this plot like a finely turned instrument in WILD TO POSSESS, a novel originally published by Monarch Books in 1959 and then reprinted a few years ago by Stark House Press in a double volume with Brewer's A TASTE FOR SIN.
In WILD TO POSSESS, Brewer throws in some subtle variations on the standard noir plot. His protagonist Lew Brookbank isn't lured into trouble by a beautiful woman but rather gets into it all on his own. As the book opens, he's already on the run, hiding out in a small town because he discovered his wife and her lover had been murdered and then covered up the crime because he thought he'd be blamed for it. But he's afraid somebody will find out what happened and the cops will come after him, so he's in a bad frame of mind to start with when he accidentally stumbles on a plot by a couple of locals involving kidnapping and murder. Desperate for money and drinking heavily, Lew decides to horn in on the plan and grab the ransom money for himself.
Needless to say, that turns out to be a bad move.
Rather than lust, Lew is driven by greed, guilt, and gin, and naturally things don't turn out the way he expects them to. Then a stranger shows up to complicate things as Lew's past comes back to haunt him. Brewer just piles the trouble on Lew until it seems almost impossible for him to get out of it, and knowing the way books like this work, maybe he will . . . or maybe he won't.
Lew's not a particularly likable protagonist, but he's so blasted unlucky that the reader can't help but root for him. Brewer keeps things racing along, tightening the screws more and more, until an over-the-top climax. To be honest, it struck me as a bit of a deus ex machina, but in the crazy, fate-doomed world Gil Brewer's characters inhabit, what else would you expect? The important thing is that he makes it work and really had me flipping the pages to find out what was going to happen.
Even though it's not a Gold Medal, WILD TO POSSESS is one of the best Gil Brewer novels I've read, and I had a great time with it.  Highly recommended.
Posted by James Reasoner at 6:00 AM

I'll think I'll forgive it for not being a GM (though clearly Monarch knew how to package a book accordingly). In terms of vest-pocket sociology, the confusion and overwhelmingness of the post-WW2 era certainly laid the groundwork for noir to flourish, and not really pushing along the misogynist angle of some works in the form, even if She lit a fuse in men, whoever she is and whatever that might actually entail (mmm, cordite fetish), doesn't sound too offputting, either (though of course the noir bad women were at least capable of actively reaching for some of what they wanted, unlike too many other female characters all over pop culture)...

I love the cover on this book! Gil Brewer knew how to write about a certain kind of woman.

Another one I'll have to look up.

Brewer is one my all-time favorites, and while I wouldn't include this one among his very best, it is quite good. I'm glad to see him getting a bit of a modern resurgence through Stark House, HCC, New Pulp Press, et al.

"There's just something endlessly appealing about the noir formula..."

So true, so true. As much as I enjoy variety in my reading, were I too have to limit myself to just one type of book my choice would be easy...I can't get enough of this type of book (speaking of which, just finished Jame's own TRACTOR GIRL and *loved* it -- highly recommended to likeminded folks who love this kind of stuff).

The first Brewer I read was THE VENGEFUL VIRGIN thanks to Hard Case Crime. Pretty damn nasty book. I thought that came very close to matching Thompson's noir world. I found a copy of Brewer's THE LITTLE TRAMP for a mere $2 last week (it wasn't beat to hell either!) and can't wait to read it.

The only Brewer book I don't yet have is MEMORY OF PASSION. I've been after that one for a number of years, and have yet to get my hands on an affordable copy. One of these days I'll get lucky.

Good one. I sure do wish Stark House would have used one or both of the original covers instead of their photo things, but the 2-book volume is worth having anyway.

In the two book volume I think A Taste of Sin is the better book. Wild to Possess is flawed but interesting for all the reasons you outlined. It follows the noir formula very closely, heaping misery upon misery for a guy who you can't feel sorry for but sure do pity.