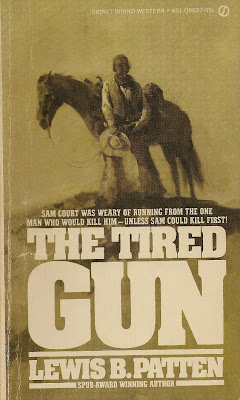 THE TIRED GUN is a very appropriate title for a Lewis B. Patten novel, because there's a distinct strain of world-weariness that runs through most of his work. If not for the happy endings demanded by the Western market during the era Patten was writing, his vision of the frontier probably would be regarded as even bleaker than that of H.A. DeRosso. And those so-called happy endings often wind up with the protagonist irreparably damaged, emotionally, physically, or both. The hero wins, but pays a high price to do so.
This novel, published in hardback by Doubleday in 1973 as part of its Double D line and reprinted in paperback by Signet a year later, is told in first person, something of a rarity for Westerns, although Louis L'Amour did it frequently in his books, notably the Sackett novels. The narrator of THE TIRED GUN is Sam Court, who was once the marshal of the little town of Cottonwood Grove, Kansas. Six years before the novel opens, a personal tragedy drove Court to leave Cottonwood Grove and take up the life of a hired gun. As the book begins, he's on the run, being pursued by a wealthy, vengeful rancher whose brother Court killed in a gunfight. The killing was self-defense, but the rancher doesn't care about that. He's determined to hang Court anyway.
Finding himself near his former hometown, Court makes the fateful decision to return there briefly. Events conspire to keep him there, however, until his pursuers catch up to him, and during that time Patten uses flashbacks to fill the reader in on how Sam Court came to be in this perilous situation.
There's not a lot of action in THE TIRED GUN, but there's a heck of a lot of HIGH NOON style suspense and tension as Court waits for almost certain death to catch up to him. Patten believed in really piling the trouble on his protagonists, so it's not enough that Court has to deal with the danger catching up to him from behind. He finds fresh problems in his old hometown, too. While I was reading this book, I thought that Patten had buried Sam Court in such a deep hole there was no way he'd ever get out of it, but when the action finally does explode at the end, Patten does a great job of resolving everything.
Patten began writing in the early Fifties, and by the Seventies, his work had become pretty inconsistent. He's at the top of his game in THE TIRED GUN, though. If you want to read a hardboiled, noirish traditional Western that packs a lot into 50,000 words, this is about as good as they come. Highly recommended.
Posted by James Reasoner at 6:00 AM

Lewis Patten has probably not received the proper recognition that he deserves. He has written over 100 westerns during the 1950's and into the 1980's, many of them outstanding novels. I see I have three stacks of paperbacks by Patten but I've not read THE TIRED GUN yet.

This review made me pull it out and it will soon be read. It sounds great...

Only a few Patten titles made it to the screen. I reviewed his DEATH OF A GUNFIGHTER with Richard Widmark a while ago. Interesting premise about a tough marshall whose day is gone.

I'm tracking down THE TIRED GUN right now. I've read some Lewis Patten and you're right, he's inconsistent in his later work. But THE TIRED GUN sounds like a winner.

I have some of the 1970s titles. If the output earlier is better, I'll try to get those. I liked his RED SABBATH (1968) I read some time ago. Thanks, James. Enjoyed the review.

First Patten I read was Death of a Gunfighter, and it led me to pick up many more from him. Since Westerns are a fairly new reading experience for me, I've found that Patten and Luke Short (as different as they are, stylistically) are at the top of my list. Thanks for the great review of THE TIRED GUN.

I went on a Luke Short binge about twenty years ago and read a bunch of his novels. I liked nearly all of them. Ought to get back to him and read the ones I didn't read then.

Inspired by your post, James, I began reading Patten's HUNT THE MAN DOWN, from 1977. I'd bought it a few years back mostly because it promised to take place in a blizzard--I'm a sucker for snow in Westerns--and so far, though it's a later work, Patten's writing is great.

I agree, HUNT THE MAN DOWN is a very good book.