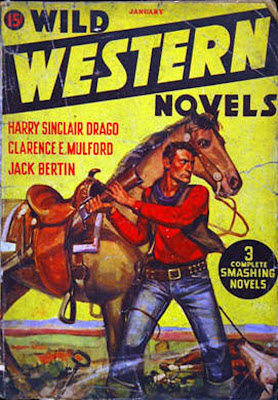 No, not WILD WEST WEEKLY, which was also a fine Western pulp magazine. WILD WESTERN NOVELS was part of the Red Star group. I don't know how many issues there were, but this is the first one. That's a pretty bland cover, but what a line-up of authors: Clarence E. Mulford (with a story about Hopalong Cassidy and the rest of the Bar 20 crew), Harry Sinclair Drago, Alan LeMay (author of THE SEARCHERS, of course, but a prolific pulpster long before that), and pulp veterans Stephen Payne and Jack Bertin. I would have been happy to read it, that's for sure.
Posted by James Reasoner at 7:00 AM

I've got Drago's book, The Great RAnge Wars, on my shelf of Western history. I pull it down and consult it when I want to figure out some detail of feuding history.

Yeah, though primarily a fictioneer, Drago wrote some excellent Western non-fiction later on in his career, much like Eugene Cunningham and William MacLeod Raine.

The Adventure House Guide to the Pulps lists only one issue for this title so it was a one shot.

I'm just back from the Adenturecon pulp show in Bordentown NJ. There were alot of western pulps for sale on the 45 tables, most very inexpensive. I need very few WESTERN STORY magazines but I actually found an issue that I still need from 1921.

Thanks for that info, Walker. I'm glad you found something you needed at the show.

Another good one, James. Thanks.

I also looked into the Adventure House Guide and while they say onw issue is known to exist they also say more are possible. More important, the issue they know to exist is the March 1936 issue wghile you have the January, 1936 issue. So not a one-shot...