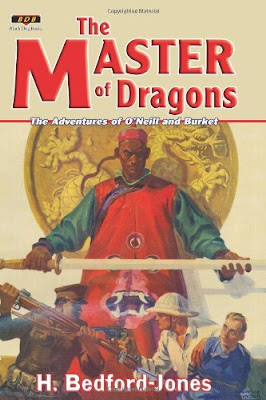 The name H. Bedford-Jones is probably not one that springs to mind when you're trying to think of Canadian authors, at least not unless, like me, you're a big fan of the man rightly known as the King of the Pulps.
Henry James O'Brien Bedford-Jones was born in , in 1887 and spent the first twenty years or so of his life in western before moving to the He started selling fiction to the pulp magazines in 1911, and that's where the vast majority of his work appeared during a career that lasted nearly forty years. Unlike Frederick Faust or Erle Stanley Gardner, who were also referred to as the King of the Pulps at times, Bedford-Jones achieved nearly all of his success in the pages of the pulps, never knowing the sort of acclaim in other media that those other two writers did. That's why I think he's more deserving of the title.
Even though he was definitely Canadian, it's a bit of a stretch to call Bedford-Jones' THE MASTER OF DRAGONS a Forgotten Book, since it first appeared this year and is still readily available from the great small press publisher Black Dog Books. But to the general public, Bedford-Jones probably is completely forgotten, so I'm going to allow it. (Hey, it's my blog. This is a benevolent dictatorship here, folks.) And it's also a heck of a good book.
This volume contains three short stories and one novella about a pair of American soldiers of fortune, Terence O'Neill and Bert Burket, getting into and out of trouble in a ruled by various warlords during the late 1920s. The excellent introduction by publisher Tom Roberts puts the stories into historical perspective and also provides some interesting information about Bedford-Jones's research methods. As usual, Bedford-Jones crams quite a bit of plot into these yarns, and there's always an intriguing twist or two. Also, his prose is crisp and clean and has aged very well. People who think all pulp writing was purple and overblown have never read Bedford-Jones.
Those stories, originally published in 1932 and '33, would have made an excellent Thirties adventure film starring maybe Randolph Scott or Clark Gable as O'Neill and Guinn "Big Boy" Williams or Victor McLaglen as Burket. I can see it in my head with no trouble. Although they were contemporary to the time Bedford-Jones wrote them, you can read them now as historical adventures and thoroughly enjoy them. I know I did. Highly recommended.
Posted by James Reasoner at 6:00 AM

No argument with any of your comments. I have it here but haven't gotten to it yet (a common complaint here), so can't comment on the contents, but Bedford-Jones is a favorite pulp writer of mine based on what I have read of his. THE GOLDEN GOSHAWK is another fine collection from Black Dog.

Time to order from Black Dog again! Love the cover on THE MASTER OF DRAGONS!