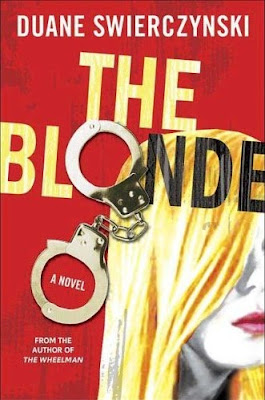 And I thought the movie CRANK was weird.

Duane Swierczynski’s THE BLONDE looks like a hardboiled crime novel, but early on it becomes obvious that’s not really the case. Reporter Jack Eisley is in Philadelphia for a meeting with his wife’s divorce lawyer, when a good-looking blonde he’s setting next to in the airport bar calmly informs him that she’s just poisoned his drink and that he’ll die by the next morning if he doesn’t do what she wants him to. Jack doesn’t believe her at first, but he becomes convinced when more crazy things start happening. A government-sanctioned assassin on a mission of personal vengeance gets involved, then a human head in a gym bag becomes important to the plot. Throw in assorted sleazy characters, a lot of unrelenting action, and some technology so advanced that it sort of pushs this book over into science-fictional territory. All of it is told in prose so fast that it hardly ever stops to take a breath, along with fine dialogue and numerous touches of dark but very funny humor.
THE BLONDE is a great thriller and easily one of the best books I’ve read so far this year. It’s also the first thing I’ve read by Duane Swierczynski, but it sure won’t be the last.
Posted by James Reasoner at 9:17 AM

A great recommendation. I'll have to look for this book.

The Wheelman is now one of my fav. all time books. I can't wait to read The Blonde.

THE WHEELMAN is great. There are some things that bothered me a bit, but nevertheless it's a thrill. Have not yet read THE BLONDE, though.

Hey, thanks James! I'm so glad you enjoyed the book.

It's funny you mention Crank, because when I first heard the plot last summer (thanks to Bill Crider), I had this sinking feeling that it was awful close to The Blonde. Then I saw it, and the two are nothing alike. (And Crank has become one of my favorite action movies--it's just so damn weird.)fa