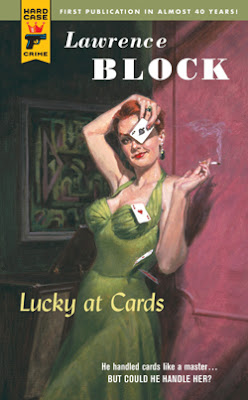 Originally published by Beacon Books in 1964 under the title THE SEX SHUFFLE and the pseudonym Sheldon Lord, Lawrence Block’s novel LUCKY AT CARDS has been resurrected by Hard Case Crime, and we should be thankful to Charles Ardai for that because it’s a fine book.

Bill “Wizard” Maynard was once a stage magician, but as the book opens he has long since turned his sleight-of-hand skills to making a living as a card sharp who can cheat at just about any sort of game. Unfortunately for him, he was caught at it by some guys who took offense. After being beaten up and run out of Chicago, he finds himself in a medium-sized, unnamed city somewhere between Chicago and New York, where he runs into a beautiful woman who’s every bit as shady as he is. Problem is, she’s currently married to a rich, successful tax attorney. Bill begins an affair with her anyway, and anyone who’s read very many books in this genre knows where that’s going to lead. The lawyer’s will is structured in such a way that they can’t just murder him, so they have to come up with a more elaborate plot to separate him from his money. But wouldn’t you know it, once they embark on this scheme – say it together with me, kiddies – Things Go Wrong.

I don’t mean to sound sarcastic. Yes, the plot’s a little formulaic and the ending might have been a tad more dramatic. But Block writes so well I don’t care about any of that. This is a beautifully rendered picture of the late Fifties/early Sixties era, with skillfully drawn characters and a pace that just rockets along in some of the best prose of anybody around, then or now. You won’t find a better example of the books that were published as soft-core sex novels back in those days but were really nice little crime yarns. Run right out and find a copy of this one if you don’t have it yet, and let’s hope that Block and Hard Case Crime decide to bring more of his early, pseudonymous work back into print.
Posted by James Reasoner at 1:50 PM

I finished reading it yesterday and enjoyed it a lot. I was wondering what the original title was and what pseudonym it had been published under.

2. That's long enough ago to wonder if things that seem formulatic 43 years later were formulaic then.

3. I wonder if Larry (and you, for that matter) ever run across a book and go, Gee, this seems familiar, then realize it's familiar because YOU WROTE IT!

Yeah, my comments definitely have 43 years worth of hindsight going for them, because 1964 was the year I started reading adult mysteries (Mickey Spillane and Ian Fleming). Plus, many of my books are much more formula-laden than any of Block's, so I don't need to be casting any stones.

I think I remember all of my novels (so far), but most of those Mike Shayne novellas I did back in the Seventies and early Eighties might as well have been written by somebody else.

I have a memory of reading some years ago one of those chatty pieces at which Larry Block is so adept in which he expressed delight that his early work, published by soft-porn publishers under titles like "$20 Lust", was being lost to posterity. The books were on non-acid-free paper and were crumbling away, he said, and it was a process he welcomed. Somewhere along the line various folks, such as Ed Gorman and Bill Schafer of Subterranean Press, persuaded him otherwise, and many of the books like the one you review here have been rescued from obscurity. I wonder how many books of that era have been/are being lost to us forever. The same thought also struck me when I was writing "Detectives in Cowboy Boots" for the current Black Horse Extra ezine at blackhorsewesterns.com. Several of the old paperbacks I scanned to illustrate the article had browning and brittle paper and the binding was sometimes by way of rusting staples that were eating into the paper -- literally not just staining it but destroying it.

I own quite a few Nightstand Books, along with the other assorted imprints from the same company, and they're all in surprisingly good shape, with the binding holding up and not much browning of the pages. They seem to be lasting better than many of the books from larger publishers of that era. But I agree that a lot of good books have probably been lost to age, and that will continue to be the case.

Everyone should keep their books in slightly colder air than is normal in apartments. That should give books a little longer life.