Season of the Machete -- James Patterson 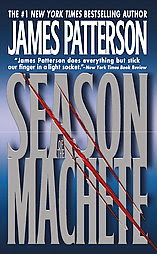 The plot of this early (1977) James Patterson novel is so complicated and over-the-top that it’s hard to describe. The CIA, maybe with the blessing of the White House and maybe not, makes an arrangement with the Mafia to destabilize the government of an island nation in the Caribbean, for reasons that were never entirely clear to me. In order to do this, they hire a husband-and-wife team of professional assassins to carry out a series of machete murders that are blamed on a local revolutionary leader. Stumbling into this plot are a former Special Forces soldier now working as a bartender on the island and his girlfriend.

Keeping up with what’s going on in this book is difficult to start with and is made even more so by some continuity errors regarding the timeline of the action. Patterson assigns dates to all of the events, and they just don’t make sense, making me wonder if there was some out-of-whack copyediting going on somewhere in the process. But despite the confusing plot, and the even more confusing way it’s told, this is a reasonably entertaining book with some interesting characters. Patterson’s books may be far-fetched, but at least there’s always plenty of stuff going on in them.
Posted by James Reasoner at 11:24 PM

This was the first, and is still the only, Patterson book I've ever read. I liked it OK but was not impressed enough to seek out any more of his work.

You might like THE JESTER, his Crusades novel co-authored with Andrew Gross. It's not REH or Harold Lamb, of course, but I enjoyed it.

Stumbling into this plot are a former Special Forces soldier now working as a bartender on the island and his girlfriend.


I'm not making fun of you James, but I loved this sentence. I often enjoyed working on my girlfriend as well, which is why I married her.

Ha! I knew there was something wrong with that sentence when I wrote it, but I was too punchy at the time to figure out what it was. That is pretty funny.