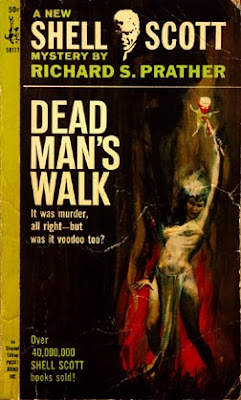 Compared to some of the magnificent covers on the Shell Scott novels done by artists like Robert McGinnis and Barye Phillips, this cover's not so great. But it's important to me because it's the cover of the first Shell Scott novel I ever read. As I've mentioned before, my dad was a television repairman for more than thirty years, and when I was a kid I sometimes went on his service calls with him. But instead of watching what he was doing and learning about resistors and capacitors and things like that, I usually took a book along and either sat in the car or found a chair in the house where he was working and read while he fixed somebody's TV. In the summer of either 1966 or '67, I can't recall which, one of the books I took along to read while he was making a service call was DEAD MAN'S WALK. I even remember the neighborhood where we went that day, although I couldn't tell you exactly which house it was where the TV was broken. What I recall very vividly, though, was the effect that reading that book had on me. I was out hunting for more Shell Scott books the very next day.
Posted by James Reasoner at 10:26 PM