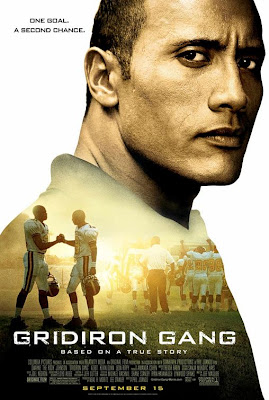 My daughter Joanna loves inspirational sports movies based on true stories, so this one was a natural for us to watch. And it's a pretty darned good film, too. Dwayne "The Rock" Johnson (as he's now billed) plays a former football star working as a counselor at a juvenile detention facility in Los Angeles who decides to form a football team from the inmates who are housed there, most of them gang members who have been convicted of violent crimes. It's true that this movie indulges in all the cliches we've come to expect from this sort of movie. At one point Joanna said, "I knew they'd have the scene where he makes them run back and forth." We also get slow-motion (but not too much) and the team of misfits coming together and the climactic play-off game against the arch-rival team, including one gaffe that made me bite my tongue to keep from saying, "They've got that all wrong!", which is also a staple of this sort of film. But the movie has a little harder edge than some in this genre, not surprising considering the subject matter, and it's very well-made. I like The Rock, too, and he does a fine job here. He's turned into a pretty good actor. So, yeah, it's a formula film, but there are a lot worse things in the world. This one is well worth watching.
Posted by James Reasoner at 10:51 PM

I recommend Akeelah and the Bee as an inspirational sports movie about spelling. Not based on a true story, but it could be. I'll probably review it on my blog.

We saw AKEELAH AND THE BEE a while back and thought it was a fine film. I'd recommend that one, too.

Another good recent inspirational sports movie is Invincible, with Mark Wahlberg and Greg Kinnear. One of my favorites of last year.

I'm sort of impressed with The Rock as an actor, as well. He's got a lot of presence, charm and likability, which for the types of films he's doing is probably 95% of the gig. "The Scorpion King," though a long way from a great movie, is entertaining (and the female lead is pretty hot, what can I say?)

Yeah, I liked THE SCORPION KING a lot. The female lead is Kelly Hu, right? Yowza.