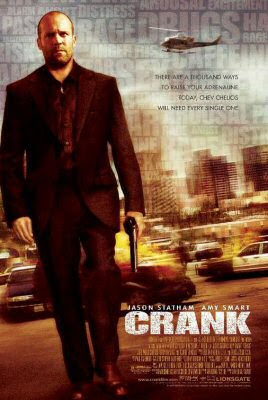 CRANK is one weird movie.

Evidently inspired by the classic film noir D.O.A. (although there's no mention of that in the credits, at least that I noticed), this is an updated version of that story. A hitman (Jason Statham) gets crosswise with some of his gangster associates, and one of them injects him with a bizarre poison that will kill him unless he keeps moving fast enough to force his body to produce enough adrenaline to counteract the effects of the poison. With the time he has left, he sets off to avenge his own murder.

It's an interesting premise, and as you'd expect, the movie is full of action. The direction and photography are hyper-stylized, with all sorts of fast motion, stop motion, other special effects, and strange lighting. This takes some getting used to but is generally effective. The movie also features the oddest cell phone ringtone I've ever heard. All of the tricks combine to make this one of the more disconcerting films I've seen.

I liked Jason Statham in the two Transporter movies, and he's good here, too, although the character he plays is considerably less sympathetic. Nearly every character in this movie with the exception of the protagonist's girlfriend is a criminal. You can't help but get involved with the quest to see justice -- or at least revenge -- done before time runs out, though.

Worth watching, but don't expect a normal movie.
Posted by James Reasoner at 10:57 PM

This is high in my Netflix queue.

I've been wanting to see this one too. I like Statham a lot.

Statham is great. Love him in the Transporter movies and in Snatch. This is one in my Netflix queue. I've heard it described in much the same fashion that you have done here.