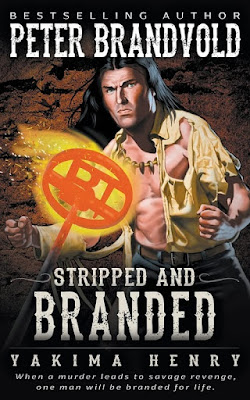 Yakima Henry is probably my favorite character created by Peter Brandvold, and he returns in STRIPPED AND BRANDED, the latest novel from Brandvold. Yakima last appeared in the somewhat heart-warming REDEMPTION TRAIL. As you might guess from the title, STRIPPED AND BRANDED is a considerably harder-edged tale.

In this one, Yakima encounters three bank robbers on the run and desperate after killing three members of a posse and losing one of their horses. They want Yakima’s horse Wolf and are more than willing to kill to get him. Of course, this is a big mistake, and all three of the varmints wind up dead. Yakima takes the bodies back to the town where they robbed the bank, figuring he’ll collect the bounty on them (even though he’s not really a bounty hunter) and that money will finance the rest of his trip to Mexico, where he intends to spend the winter.

What he’s not counting on is the fact that one of the robbers was the black sheep son of the woman who owns the largest ranch in the area, and she wants vengeance. There are other things going on, too, but that’s best left to the reader to discover.

Nobody could ever accuse Brandvold of taking it easy on his characters. Yakima suffers a lot in this one, both physically and mentally. The action is almost non-stop, the characters come to vivid life, and Brandvold continues to be maybe the best in the business at setting a scene and making it real. His work always reminds me of some of the great hardboiled Western writers of the past, authors such as Harry Whittington, T.T. Flynn, William Heuman, Les Savage Jr., Marvin Albert, and Clifton Adams, although with a more modern, grittier tone. I give all of his work a very high recommendation, and STRIPPED AND BRANDED is one of his best.