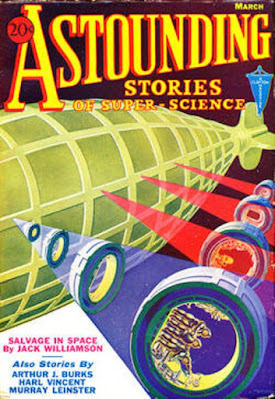 This novelette first appeared in the March 1933 issue of ASTOUNDING STORIES OF SUPER-SCIENCE, edited by Harry Bates. You can't really tell it's that old, however, as Jack Williamson's clean, almost spare style reads as if the story was written much more recently than that.

The protagonist is young asteroid miner Thad Allen, who leads a lonely existence wandering among the asteroids searching for valuable metals. But then he comes across what appears to be an abandoned space liner and immediately thinks that if he can get it back to Mars and claim it as salvage, he stands to make a lot of money from the discovery. Unfortunately for Thad (and I'm sure you saw this coming), something is still alive on the spaceship, as he discovers after coming across some ominous bloodstains while he's exploring the seemingly deserted corridors. Then there's the coffin-like apparatus containing the body of a beautiful young woman whose fate greatly intrigues Thad. But will he survive long enough to figure out what happened here?

"Salvage in Space" is basically a suspense yarn, and a very good one. The level of tension that Williamson creates in this story reminded me a little of John W. Campbell's "Who Goes There?" "Salvage in Space" isn't quite on that level, but I had a really good time reading it. Williamson leaves one plot point unresolved, which I found a little annoying, but other than that I found it to be a very good story. There's a free e-book version of it available on Amazon, if you don't happen to have a copy of that 1933 pulp sitting around. It was also reprinted in the anthology THE EARLY WILLIAMSON and the Haffner Press volume WIZARD'S ISLE.

I actually do happen to have a copy of that pulp lying around. An electronic copy, but still, that counts.