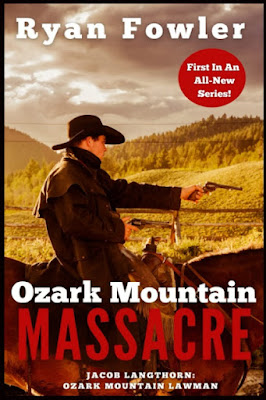 Taney County, Missouri. 1883. Tensions are thick. The gun smoke is even thicker!

Jacob Langthorn just wants peace. Having roamed the West, he’s happy to be back home in the beautiful Ozark Country of Southwestern Missouri. With a cabin by the creek and kinfolk nearby, Jacob is ready for a quiet life.

But fate has other plans.

With criminals running rampant in Taney County and crooked officials turning a blind eye, someone has to step in and tame a lawless land. So, Jacob straps on his guns once more and confronts a violent band of outlaws.

But other folks want to take the purge a few steps further. What started as a one-time event has become a movement. A group of vigilantes in horned masks are terrorizing the mountains, burning out and taking down anyone they deem unfit for their community. With families split and friendships torn apart, Jacob will have to step in once more and fight a monster he helped create.

Not knowing who he can trust or if he’ll even survive, it’s going to take all the grit Jacob has to stop the vigilantes before full-scale war breaks out and the Ozarks run red with blood.

(I read this a while back in manuscript and thoroughly enjoyed it. It's a fast-paced, very well-written traditional Western yarn with plenty of action, but what really comes through is Fowler's love of the setting, which he captures beautifully, and his empathy for his well-developed characters, especially Jacob Langthorn. This is Fowler's first Western novel, but it won't be his last. Jacob Langthorn's second adventure is already in the works, and I'm eager to read it. This one is highly recommended for Western fans!)