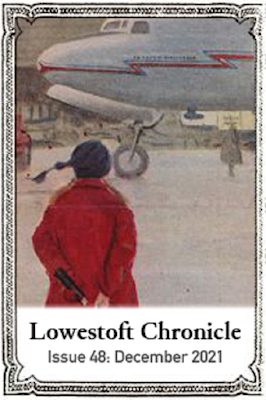 Ascend with Lowestoft Chronicle this winter!

In Issue 48: A doctoral candidate lands a three-month study abroad opportunity in Barbados and swiftly becomes a newsworthy Caribbean personality. Romance blooms while a withering magic show descends into chaos at a retirement home in Pittsburgh. A drifter imprudently misses his scheduled ride off a small, isolated island and then overstays his welcome with the disobliging local deadbeats. And devious thieves test the mettle of a salesman with big plans during his 1941 business trip to the Big Apple.

Our thanks to all contributors, as well as everyone who submitted work to us. We are currently accepting submissions for Issue #49 (due on March 1st). Preference is given to humorous submissions with an emphasis on travel. See our submissions page for guidelines.

This November, we made the following nominations for the Pushcart Prize: Best of the Small Presses series, published every year since 1976.

Full details can be found on the website here: http://lowestoftchronicle.com/lowestoft-chronicles-2021-pushcart-prize-nominations/
Nominations for the Best American Series 2022

We recently nominated the following pieces from 2021 for Houghton Mifflin Harcourt’s annual Best American anthology series. Pleasingly, The Best American Essays series editor, Robert Atwan, selected Scott Dominic Carpenter’s essay “Squirrel Pie and the Golden Derriere,” from issue 37 of Lowestoft Chronicle, for inclusion in his list of “Notable Essays and Literary Nonfiction of 2019” in The Best American Essays 2020 collection. Our best wishes go out to these other fine writers featured in past issues of Lowestoft Chronicle.

Full details can be found on the website here: http://lowestoftchronicle.com/lowestoft-chronicles-nominations-best-american-series-2022/

High adventure and mystery can be found in this pair of haunting classics from the king of eerie occult fiction, Sax Rohmer. This collection includes a scholarly account of the conception and reception of these two books, penned by the editor of Lowestoft Chronicle.

You can purchase the book from Stark House Press, Amazon, or other online booksellers.

The Thirteenth Studebaker by Robert Wexelblatt

The Money by David Shawn Klein

A Particular Madness by Sheldon Russell

The Dressmaker's Daughter by Linda Boroff

Pieces of Bones and Rags by Michael C. Keith

Under an Outlaw Moon by Dietrich Kalteis

Behind the Lines by Mary Donaldson-Evans

The Iron Horse: A Faraday Novel by James Reasoner

Posted by James Reasoner at 3:06 PM