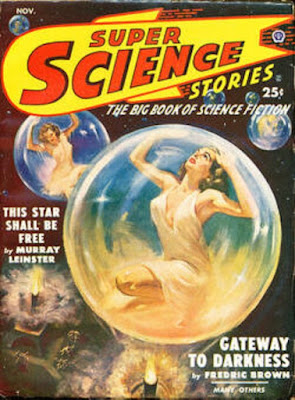 This issue of SUPER SCIENCE STORIES has a good cover by Lawrence Sterne Stevens. Not one of my absolute best, maybe (in my opinion), but still eye-catching enough that I would have picked up this issue at the newsstand. And once it was in my hands, the lineup of authors inside would have been enough to get me to plunk down my hard-earned pazoors: Fredric Brown, Ray Bradbury, John D. MacDonald (twice, once as himself and once as John Wade Farrell), Murray Leinster, Frank Belknap Long, Margaret St. Clair, and Neil R. Jones with a Professor Jameson story. That's a lot of heavyweight talent.
Posted by James Reasoner at 4:00 AM

Somewhat off topic. I devoured the Travis McGee novels in my late teens/early twenties. Tried to return to them a few years back and stopped after the second one. Unlike Nero Wolfe (just finished 2x thru the canon) and Perry Mason (2x plus a few 3x), they seemed to have lost their appeal.

I don't think I've ever reread anything by JDM. I was thinking about rereading one or two of the early McGees, but I haven't gotten around to it yet.

I have reread a few of the Nero Wolfe and Perry Mason novels, and I agree, they hold up quite well.

I did not “discover” JDM’s science fiction until well after reading the Travis McGee series. I was kind of amazed that it was the same author. Recently I read some Murray Leinster westerns and had the same feeling of disbelief that this familiar SF author wrote these westerns.

That IS a pretty nice Stevens cover. On interiors, he sometimes seemed to be a “Poor Man’s Virgil Finlay”, but as a cover painter, he was FAR superior to V. F.

I’ve never read any of MacDonald’s SF. Much prefer his earlier singletons like SOFT TOUCH and DEADLY WELCOME to the McGees.

I actually started Cinnamon Skin last night though I'm pretty sure I read it years ago. It's a bit dated but man can MacDonald hold your interest. One chapter, I said. Next thing I knew it was four in the morning.