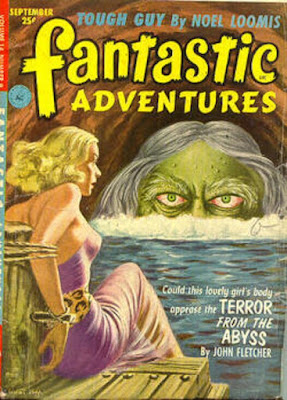 That's a good cover by Walter Popp on this issue of FANTASTIC ADVENTURES. Popp also did some excellent paperback covers during the Fifties, most notably for Beacon Books. John Fletcher, the author of the lead novella in this issue, appears to have been a real person, not a Ziff-Davis house-name, although he wasn't prolific at all. Other authors with stories in this issue are Noel Loomis, Rog Phillips, Don Wilcox, and John Jakes (Mr. Kent Family Chronicles his own self, or as I call him, "the guy whose books taught me how to write historical sagas"). I've always found FANTASTIC ADVENTURES to be an inconsistent but usually entertaining pulp. This issue looks to be solidly in that tradition.
Posted by James Reasoner at 4:00 AM

I don’t have this issue but will seek it out. I love Walter Popp’s art. Also a good set of authors. I have always been fond of Rog Phillips (Roger P. Graham I think was his given name). He was one of the first magazine writers I discovered reading the digest Fantastic issues in 1959. He was a poker playing pal of Anthony Boucher) who encouraged Rog to up. Several sharp stories in Alfred Hitchcock magazine ended up in anthologies including Boucher’s best of the year. Two of his SF/fantasy stories made it into Merrill’s best anthogies including “The Yellow Pill” perhaps his best stories.

I don't believe I've ever read anything by Rog Phillips, but I have some of his science fiction novels that were reprinted by Armchair Fiction. Might be time to dig out one of them!

Rog's best pulp novel in my aging memory was "So Shall You Reap!" (Amazing 1947), epic pulp. I remember it was also a favorite of my old friend Ted White, who was a Rog fan. I have that pulp. He did some original paperbacks for a Chicago Century Books World of If a 1951 Digest-size and Worlds Within (1950) and Time Trap 1951 all of which I have but have not read as they didn't grab me. He also had an Avalon HB The Involuntary Immortals (1949) reprinting a novel from a 1949 Fantastic Adventures which I read long ago as a teenager.

"So Shall Ye Reap!" is available as an e-book, and I just bought it. I may have a trade paperback reprint of it, too, but this way I don't have to go looking for it.

I have that ebook but haven't read it yet. I remember reading one or two his stories in Isaac Asimov Presents the Great SF Stories from DAW back when I was in high school and college.