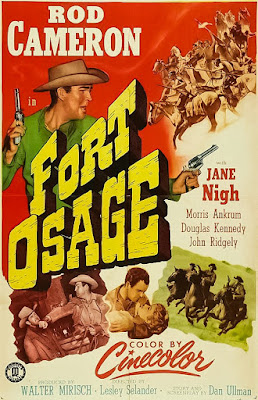 I recall my dad liking Rod Cameron Westerns. Rod was no John Wayne, Randolph Scott, or Audie Murphy, mind you, but if one of his movies was on TV, my dad would usually find the time to watch it. I hadn't seen one in quite a few years, but the other day I watched a 1952 release called FORT OSAGE, a movie that to the best of my memory I'd never seen before.

Cameron plays a wagonmaster in this one, but it's not a wagon train movie. Almost all the action is set in Fort Osage, a Missouri town used as a jumping-off point for groups of immigrants heading west. Cameron has to deal with a couple of crooks (Morris Ankrum and Douglas Kennedy), a government agent (John Ridgley, playing a good guy for once), a beautiful girl (Jane Nigh, an actress I never heard of), and some hostile Indians including the great Iron Eyes Cody.

It's all a little talky, but the occasional action scenes are good, as you'd expect from an old pro director like Lesley Selander. Dan Ullman's script leaves few cliches unturned, but there is a really nice twist toward the end that turns one of the B-Western tropes on its head.

So how was ol' Rod? Not bad, as it turns out. He wasn't a great actor, by any means, but he looks great in this movie and definitely has an impressive screen presence. Watching it makes me want to watch some other Rod Cameron movies where he has better directors and scripts. Even with its shortcomings, though, FORT OSAGE is a fairly pleasant way to spend an hour and a half if you're a fan of old Western movies, like me.
Posted by James Reasoner at 3:00 AM

The best Cameron western I've seen is Panhandle from 1948. It's low budget, but a tight, tough and satisfying story.

I'm always on the lookout for those little known, hardboiled b-westerns.

James, I remember Jane Nigh from the early TV series BIG TOWN. IMDB says the show ran from 1950 to 1956, first with Patrick McVey as her co-star from 1950-54, then Mark Stevens from '54 to '56. Unless I have a really good memory, I must have seen the McVey episodes in later syndication, because it's he, not Stevens, that I recall from the series.

James, I remember Jane Nigh from the early TV series BIG TOWN, as reporter Lorelei Kilbourne -- great name. According to IMDB, the episodes that teamed her with Patrick McVey as the male lead ran from 1952 to 1954. Either I saw the show in later syndication, or my memory for trivia is even better than I thought.

I do not know if I ever saw a Rod Cameron western film. About the time my family bought our first TV Cameron starred in the syndicated show "State Trooper." It was a modern western with Rod as a Nevada Trooper who sometimes managed to ride a horse after the bad guys. My family sure enjoyed the half hour show.

Cameron must have been an owner of the production company. When "State Trooper" ran out of gas he stepped right into the lead role of a P.I. show called "Coronado Nine." The two series lead characters met at a roadblock to promote the new show.