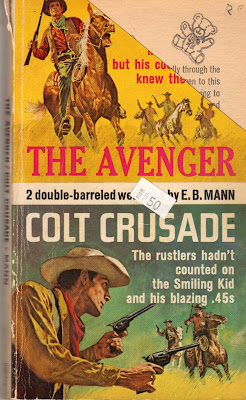 In 1966, Belmont Books brought out a paperback reprint of two of E.B. Mann’s short novels that first appeared in the Western pulps, THE AVENGER ( originally published in ADVENTURE NOVELS AND SHORT STORIES, April 1939) and COLT CRUSADE. The origin of that second novel is a bit of a mystery. As you can see from the cover copy on the paperback (that’s my copy, by the way, complete with price sticker, clipped corner, and bookstore stamp from the Used Book Warehouse in Rockport, Texas), the protagonist of COLT CRUSADE is known as the Smilin’ Kid. A little investigation turns up the fact that a story entitled “The Smilin’ Kid” was published in the Second August Number, 1929 issue of RANCH ROMANCES under the name J.A. Adams, who, at least according to the Fictionmags Index, never published anything else. E.B. Mann’s first stories were published in RANCH ROMANCES in 1928, which leads me to believe that he was actually “J.A. Adams” and “The Smilin’ Kid” is the story reprinted in paperback as COLT CRUSADE. Why Mann would have used a pseudonym like that, I have no idea, but that’s my hunch. 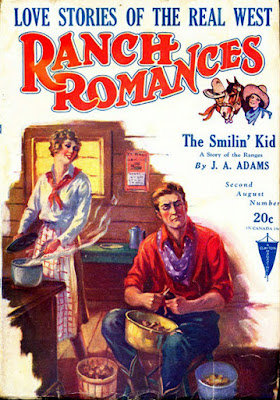 Bibliographic speculation aside, I recently read COLT CRUSADE and thoroughly enjoyed it. The Smilin’ Kid, whose real name is Kenneth Lamb, shows up in the town of Pinto and asks the local ranchers and businessmen to give him the job of sheriff, because he wants to clean up the area and put a stop to the rustling ring led by Pete Martin, a crooked rancher, and Manuel Sanchez, a Mexican bandit with a headquarters below the border. What motivates the Kid to take on this challenge? We never find out, which is the novel’s only real flaw. The Smilin’ Kid is a very entertaining character, but ultimately he’s a cipher. Maybe it’s just a love of adventure, in which case adventure has some competition from the beautiful daughter of one of the ranchers, since the Kid soon falls in love with her, too.

It’s a very standard plot, but Mann livens it up with a few minor plot twists and a lot of well-written action scenes leading up to an epic final battle that’s just great and reminded me very much of the Homeric final battle in Clarence E. Mulford’s HOPALONG CASSIDY. I haven’t read much by Mann, but this is easily the best of his yarns I’ve encountered so far. It might be too old-fashioned for modern Western readers, but I loved it.

By the way, there’s no scene in the novel that matches the scene on that RANCH ROMANCES cover. So maybe I’m wrong, or maybe the artist on the pulp just took a little dramatic license.

I didn’t read the other novel in the Belmont paperback, THE AVENGER, although I started it. But I realized right away that it was the source novel for the Johnny Mack Brown B-Western GUNS IN THE DARK, which I watched recently enough that the plot is still clear in my mind. From what I read, the movie is a very faithful adaptation of the story, too. So maybe I’ll let that memory fade and read the novel sometime later on, or maybe I’ll never get to it, but either way, I thoroughly enjoyed COLT CRUSADE and recommend it to anybody who enjoys a good old-fashioned Western.

BELMONT printed some wonderful books back in the 1960s. Mostly I read the BELMONT SF novels, but I'll watch for the BELMONT westerns.