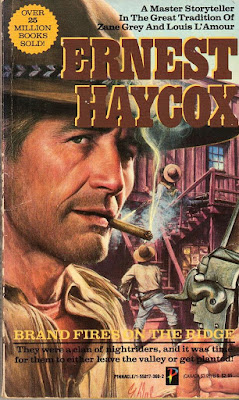 Being in the mood to read something by Ernest Haycox, I looked around to see if I have any more of the collections that reprint his pulp novellas. I’ve read several of those in the past and really enjoyed them. Sure enough, there on my shelf was BRAND FIRES ON THE RIDGE, a Pinnacle Books edition from 1990 that contains two novellas: “Brand Fires on the Ridge”, originally published in the August 21, 1929 issue of the pulp WEST, and “The Killers”, from the July 10, 1930 issue of SHORT STORIES. 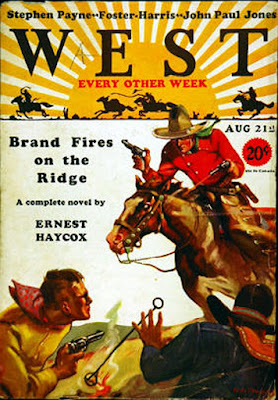 The protagonist of “Brand Fires on the Ridge” is King Merrick, a young cowboy who’s gone off adventuring for the winter but now comes back in the spring to the ranch where he worked before as the foreman. He finds that job still available, but he’s lost the young woman he planned to propose to. Worse still, he’s lost her to his best friend.

But King doesn’t have time to mope about that very much, because the ranchers in the valley band together and hire him to put a stop to a plague of rustling that threatens to wipe them out. At one end of the valley, see, lives an outlaw family called the Brierlys. Their crimes have been tolerated because they never stole much from any one ranch, spreading out their larceny over all the outfits in the area. But now they’ve gone in for rustling in a big way, and they have an inside man working for them, too. It’s part of King’s job to find this traitor.

So King has plenty on his plate, including a beautiful redheaded café owner, a couple of overlapping romantic triangles, and a mysterious old-timer. Even so, as with much of Haycox’s work, there’s not a lot of action in this yarn, although when it finally starts, it’s well done. Instead, you get emotionally complex characters, a lot of suspense, and some really fine, vivid writing.

This story was reprinted by Tower and Belmont/Tower under the title WIPE OUT THE BRIERLYS, and it must have been successful for them since it went through three separate editions with different covers. 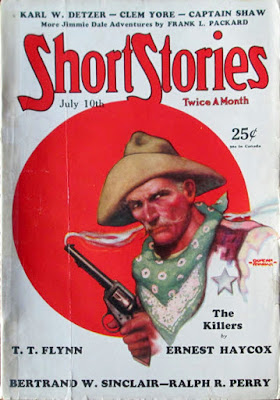 “The Killers” is another entry in Haycox’s series featuring drifting cowpokes Joe Breedlove and Indigo Bowers. Joe is big and dumb-looking, but he actually has a keen brain. Indigo is a scrawny little galoot who’s really a very dangerous gunman. In this one, they’re getting ready to spend the winter in an isolated cabin when a stranger shows up and gets himself shot down on their doorstep by a bushwhacker. The killer gets away, but Joe and Indigo aren’t going to stand for that and set out on his trail. Their quest leads them to a hidden valley, two feuding clans, and a lot of trouble.

This one proves that while Haycox often preferred introspection over action, when he wanted to burn powder he could do so with the best of ’em. “The Killers” is more action-packed than any Haycox story I’ve ever read, with gun battle after gun battle. The pace is great, but there are still nice moments of characterization here and there, especially the ones that focus on the slightly world-weary Joe Breedlove. I don’t know how many of these Breedlove and Bowers stories there are, but I still have at least three of them on hand and look forward to reading them.

Like some other Western authors from that era—T.T. Flynn and L.P. Holmes come to mind—Ernest Haycox used very standard Western plots in his stories. There’s nothing in “Brand Fires on the Ridge” and “The Killers” that you haven’t seen in scores of other pulp Western yarns. What elevates his work, as with Flynn and Holmes, is the pure writing talent that shines through. These two stories are well worth reading and get a high recommendation from me. 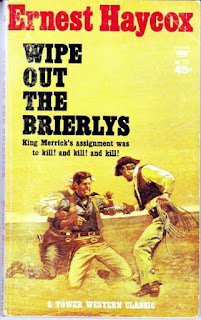 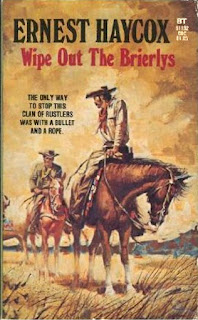 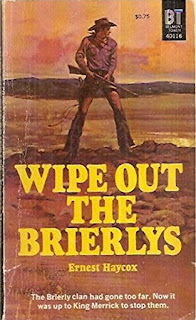 Posted by James Reasoner at 2:30 AM

I have a dozen or so Ernest Haycox Westerns. Time to read one after this great review!

The earlier Haycox stories are, the better, at least for me, especially those that appeared in pulp magazines, rather than the so-called slicks. That's just me, of course.

So thanks for this review, James. I'm sure I have copies of at least one of the various paperback combos. Time to track it down!