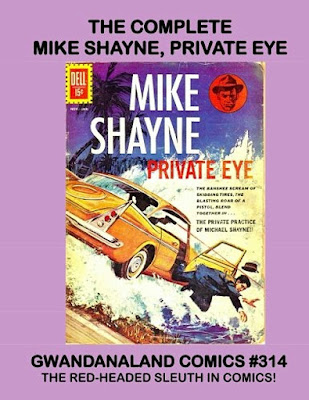 A number of years ago, I posted about the Mike Shayne comic book series published by Dell in 1961 and ’62. Dell was publishing the Mike Shayne novels in paperback, very successfully, and I suppose someone there decided a comic book version of the character might work, too. That didn’t really pan out, since there were only three issues. I’d heard about them for years but never came across any copies. However, they’ve recently been reprinted in a nice trade paperback edition by some outfit called Gwandanaland Comics, so I picked up a copy and finally read them after all these years.

Each issue is based on one of the novels by Davis Dresser writing as Brett Halliday: THE PRIVATE PRACTICE OF MICHAEL SHAYNE, BODIES ARE WHERE YOU FIND THEM, and HEADS—YOU LOSE (originally published as BLOOD ON THE BLACK MARKET). By the way, nowhere in this reprint or the original comics is there any mention of Dresser or Halliday, and the copyright is by Dell Publishing Company. Any kid coming across these back in the Sixties who wasn’t familiar with the books would have thought Shayne had been created for the comics.

Each of the source novels has a pretty complicated plot, as was common in the Shayne series, and the comic book versions actually do a pretty solid, faithful job of adapting them. They’re toned down a little, but not much. You’ve still got murder, blackmail, adultery, and more murder. I can imagine a kid reading these and getting lost in all the twists and turns of the plots. Nor does the third issue pull any punches about Shayne’s wife Phyllis dying in childbirth, along with the baby, and leaving Shayne pretty much a broken man until a murder case pulls him out of that despair. Twelve-year-olds just aren’t the target audience for these yarns. (Well, unless you’re a weird twelve-year-old like I was, since I started reading the Shayne novels about that age . . .)

From what I’ve been able to find on-line, the first two issues were written by Ken Fitch, and the third one probably was, as well. The art in all three issues is by Ed Ashe. Both of those guys were journeyman comics pros with less than a hundred credits each, hardly top talent, but they did pretty good jobs, anyway. Fitch condenses the action down well, and there’s even a newspaper headline in the second issue that includes his name as an in-joke. Ashe’s Mike Shayne resembles the one on the Dell paperback covers, which also appears on the first two comic book covers. The worst glitch is the coloring in the first issue, which finds Mike Shayne with bright blond hair instead of red, while his reporter buddy Tim Rourke is the one with red hair. That’s switched around in the other two issues and looks a lot better. Each issue also includes a one-page text story and a four-page backup comics story, all of them minor stand-alone crime yarns.

There’s a reason these comic books are obscure. They probably sold poorly and not a lot of copies are still out there to be found. And while I certainly enjoyed them, there aren’t enough people interested in them to make them really collectable. Throw in the fact that Fitch and Ashe were no Lee and Kirby, and you can see why they haven’t been reprinted until now. (And now I’m visualizing a Kirby version of Mike Shayne. You know, that could have worked. Just think about how he drew Reed Richards and Johnny Storm in suits and hats in early issues of FANTASTIC FOUR . . .)

I just looked at amazon and I see there are some other collections:

I read a half dozen or so Mike Shayne novels a few years back. Enjoyed them. Just never went back to the character, too many books, too little time.

Odd choice to have a comic on, one of the heaviest drinking detectives (Martell in his coffee for breakfast).

Like George I never heard of the Mike Shayne comic books until this post and I was a huge fan of the books when these comics appeared. As I still bought comics then, I think I would have seen them if they were distributed in the Atlanta area. The Michael Shayne television program starring Richard Denning also debuted on NBC and Dell might have figured on a boost of interest. The Dell paperback reprints from the 1960-61 period featured plugs for the show.