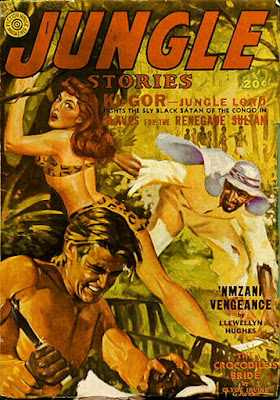 Continuing in my reading of the Ki-Gor series in order, I’m up to “Slaves for the Renegade Sultan”, which originally appeared in the Spring 1942 issue of JUNGLE STORIES, with a cover by George Gross, one of my favorite pulp and paperback cover artists. This one doesn’t have a very high reputation among Ki-Gor fans, and I thought it was kind of a step back in a steadily improving series, too.

First of all, I suspect this is another case of the cover being done, title and all, before the story was ever written, because while the villain is a slave trader, no actual slaves appear and that activity plays no part in the plot. Who’s the renegade sultan? Don’t know, because no such character appears in the story or is even mentioned.

What drives the plot of this yarn is a drought, and the clashes over land and water in such extreme circumstances could have produced a good story. It’s an interesting set-up, and I’ll give the author credit for that. I’m almost certain this is a totally different author from the one who wrote the past few stories. Ki-Gor’s pygmy sidekick N’Geeso and the loyal elephant Marmo are nowhere to be found. Tembu George, the American-born leader of the Maasai, is back after being missing in the previous story, and although his stereotypical dialect is overdone, he’s still a great character, smart and brave and funny. Ki-Gor himself is as stalwart as ever.

Where the author really misses badly is his characterization of Helene, Ki-Gor’s beautiful redheaded wife and partner in adventure. Occasionally, the authors have had her do something dumb in the past, but without getting into spoilers, she’s an absolute idiot in this one, a far cry from the badass who mowed down bad guys with a Thompson submachine gun in an early novel in the series.

Having said all that, the story moves along fairly swiftly and features several good action scenes. I found it entertaining in some parts and annoying in others, and the ending is a bit of a letdown. However, the next story in the series is supposed to be a really good one, so I’m looking forward to reading it and will report back here on it in due time.

Okay,the next issue of Jungle Stories has the well-regarded (and wonderfully titled) Blood Priestess of Vig N'Ga. Only a Ki-Gor story has a title like that.

I haven't read that one, and I believe I'll strain my aging eyeballs by attacking the Hanos facsimile reprint I bought from Robert Weinberg almost thirty years ago.

After that it's only six more issues to the sublime Stalkers of the Dawn-World.
If there is a more uneven pulp series than Ki-Gor I haven't encountered it, but the good ones are so resplendent that they make wading through the weak ones worthwhile.

Has "Stalkers of the Dawn World" been reprinted? I have a lot of reprints of later issues and will have to look for that one. I'm going to have to start reading them out of order pretty soon, unless Altus Press brings out Volume 4 of the Complete Adventures in the near future.

The guys that put out Pulp Vault back in the day produced a full size reprint of Stalkers of the Dawn World, which is how I read it. I don't believe it's been reprinted in any other form.
(Please note, I spotted an on-line version you could in theory read for free, but when I tapped the link it attempted to pump my laptop full of malware. Beware.)

If you get a keen urge to read it, I can lend you my copy.

Looks like there's an Adventure House reprint of that issue, so I ordered a copy along with a few more I don't think I have. Counting the stuff I ordered today, I believe I have 48 of the 59 novels in one form or another. Whether I'll ever read all of them is another question, but I think there's a decent chance of it, if I live long enough.

Maybe I should break out my own Hanos copy of Vig N'Ga again and dare the tiny print with aging eyes. If all three of us are reading it at once, there may be some sort of warping of the space time continuum...

It's a really tasty one.

I read quite a few of the Hanos reprints (mostly Phantom Detective novels) many years ago. Not sure if I would attempt it now. But I'm going to read Vig N'Ga in the Altus Press collection next, as soon as I finish the book I'm reading now, probably in a couple of days.