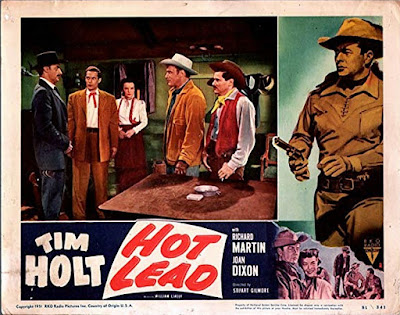 A number of years ago, one of the local TV stations ran quite a few of the B-Westerns starring Tim Holt and Richard Martin, and I remember thinking they were excellent, with good scripts and production values that were a little higher than a lot of B-movies. I hadn’t seen one since then until I recently watched HOT LEAD, a 1951 release written by William Lively and directed by Stuart Gilmore.

This one finds Tim Holt playing, well, Tim Holt, a cowboy who works on the Circle Bar Ranch owned by Gail Martin (Joan Dixon, who I have say, based on this one movie, isn’t a very likable female lead). Holt, who was a little on the short and stocky side and tended to wear very plain outfits in his movies, is pretty believable in the part. His buddy Chito Jose Gonzales Bustamonte Rafferty (Richard Martin) is also a ranch hand on the Circle Bar. They get mixed up in the efforts of an outlaw gang to force an ex-con telegrapher to help them hold up a train and steal a gold shipment, and before everything gets straightened out in the end, Tim and Chito find themselves mistaken for owlhoots and on the run from the law.

This is the only Tim Holt Western scripted by William Lively, and while it’s not as well-written as I remember the other movies in the series being, there are a few good lines. No real plot twists, though, and Chito isn’t as funny as he usually is. By the way, if you noticed the character’s full name above, you probably tumbled to the fact that Chito isn’t at all politically correct in this day and age, at least on the surface. But he’s actually one of the best sidekicks in B-Westerns, every bit as tough and smart and competent as Tim. The two of them work very well together, both as characters and as actors. Elsewhere in the cast, the two main bad guys are John Dehner and Robert Wilke, so that’s another plus for the movie. The action scenes and photography are top-notch, for the most part.

So while HOT LEAD isn’t as good as I remember the other Tim Holt Westerns from that era, I very much enjoyed watching it. The Roy Rogers movies will always be my favorite B-Westerns, followed probably by the Hopalong Cassidy movies, but I think the Tim Holt Westerns from the late Forties and early Fifties are well worth seeking out. I plan on doing just that, because I want to watch (or re-watch) more of them.

Weird, I just watched a Tim Holt SF movie, The Monster That Ate The World, I think it was titled. Also from about the same time period. Not a western, but a Navy yarn. With westerns dying, I guess he was hoping to find other areas in film.

I like Tim Holt a lot, even the earlier movies where his sidekick was Ukelele Ike

That's The Monster That Challenged the World, Tom!
Great 1950's atom age flick with a notably gross, nasty, man-eatin' sea slug monster, created life size by the special effects guys.
Even as a kid I was so well-marinated in the works of Robert E. Howard I imagined that Conan's broadsword would have made short work of the thing.

Right, thanks. The Monster that Challenged The World. I should have looked up my copy instead of relying on memory (LOL).