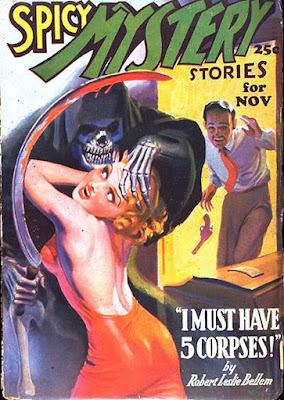 With Halloween coming up this week, we have a Weird Menace cover today, of course. This one is by H.J. Ward, on an issue of SPICY MYSTERY STORIES that features the work of the usual suspects in a Spicy pulp: Robert Leslie Bellem, under his own name and one as by Jerome Severs Perry; Victor Rousseau with three stories, one each as by Lew Merrill, Hugh Speer, and Clive Trent; E. Hoffmann Price; Edwin Truett Long writing as Carl Moore; and something of an oddity, a story by William B. Rainey, normally a Wyatt Blassingame pseudonym but in this case ghosted by Frank Gruber.
Posted by James Reasoner at 4:30 AM

That's a fine cover. Do we know if it's a Ward?

While there are countless examples of a pulp cover featuring a damsel in the clutches of some vile villain in the foreground, and a steadfast hero rushing to the rescue in the background, I don't believe I've ever seen one in which the would-be hero was so horrified by the mere appearance of the villain that he drops his gun and looks totally incapable of saving the day. I wouldn't be surprised if this fellow just turned around and ran the other way.

It's amazing just how gruesome and objectionable some pulp covers were. This one is so full of horror that even the hero drops his gun and screams. I imagine many newsdealers simply refused titles like this or hid them under the counter.

The FictionMags Index says the cover is by Ward. The girl looks like his work. I agree, the so-called hero appears to be useless.

Well, come on! A gat isn't going to pull the plug on the Grim Reaper. What vital organ will he pierce? Death is there to collect, and nothing escapes his scythe...