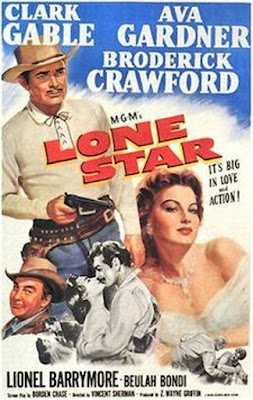 I keep coming across Westerns that I somehow never saw on TV when I was growing up. LONE STAR is a big budget A picture from 1952 starring Clark Gable, Ava Gardner, and Broderick Crawford. The plot concerns the struggle within Texas in 1845 over whether to remain an independent republic or join the United States.

Gable is a somewhat shady operator working on behalf of former president Andrew Jackson (Lionel Barrymore in his final role) to bring Texas into the Union, mostly because that will ignite a war with Mexico and Gable's character stands to make a fortune from a government beef contract if that happens.

Opposing him is Broderick Crawford, who wants Texas to remain a republic because he has a shady plan to become its president. He and Gable are mortal enemies, but there's also an undercurrent of friendship and respect between them, largely because when they first meet, they wind up fighting off a Comanche war party in an excellent action scene.

Speaking of movie history, LONE STAR really plays fast and loose with it, as well as the geography and terrain of Texas. But that's to be expected from Hollywood. Anyway, you don't watch a movie like this to learn anything. You watch it to enjoy Crawford's hulking nobility, Gardner's sultry beauty, and Gable being, well, Clark Gable, as pure a Movie Star as there ever was. Plus a good supporting cast that includes Barrymore, Beulah Bondi, and Ed Begley; a fast-paced script by old pro Borden Chase (based on one of his magazine stories, the credits tell us, but I don't know which story); and plenty of good action scenes leading up to a stirring ending. LONE STAR is entertaining, well-made hokum, and most of the time, that's plenty good for me. I enjoyed it.
Posted by James Reasoner at 3:00 AM

LONE STAR may have appeared first as a magazine story, but if so, I haven't had a chance to track it down. It did appear as a paperback original from Gold Medal in 1952 (#236) as a tie-in to the movie. I don't know if the movie was based on the book, or if the book was a novelization of the film. Hope this helps!

Thanks, Steve. I didn't know that.

Except for the newspapers run by alcoholic editors(the other stereotype).

At Universal, Chase worked on the script for the remake of Iron Man (1951), a boxing film. He wrote another Western for Mann and Stewart, Bend of the River (1952), AND DID LONE STAR (1952) FOR CLARK GABLE AT MGM; MGM PAID $60,000 FOR HIS STORY FOR THE LATTER.[12], and the script was based on a story by Howard Estabrook (see the credits in IMDB), so I think that the book is a novelization. Hope this helps!
Best from Italy,
Tiziano Agnelli