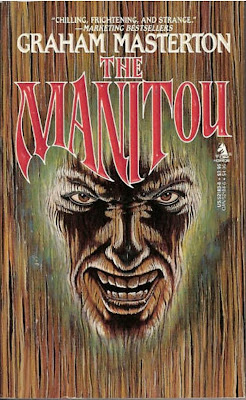 I always try to read some horror fiction for the Forgotten Books post closest to Halloween, and this year it’s THE MANITOU, the debut novel from prolific horror, mystery, and historical novelist Graham Masterton. This book was published in 1976 and was very successful, selling enough copies that they turned up in used bookstore overstock well into the Eighties. When I owned a used bookstore during the era, I always had multiple copies on my shelves. I never got around to reading it until now, though. (There’s also a movie adaptation from 1978 that I’ve never seen.)

I knew that a manitou is an American Indian spirit, so I was expecting something set in the West, but nope, nearly the entire book takes place in Manhattan. The narrator is a slightly shady fortune teller and tarot card reader who knows he’s a charlatan but still believes, at least somewhat, in mediums, psychics, and assorted other supernatural stuff. He gets drawn into the case of a young woman who has a strange tumor growing on the back of her neck at an impossible rate. X-rays reveal that the growth is not so much a tumor as it is a living creature of some sort that doesn’t belong there. The whole business quickly turns into a deadly threat that might wind up wiping out the entire city if the protagonist and his friends can’t find a way to stop it.

Even if you haven’t read this book, if you’ve read much horror fiction at all (especially from the Seventies and Eighties), you can predict pretty much everything that’s going to happen. The plot’s on the thin side and doesn’t have any real twists to it. There’s not much characterization, either. We don’t even find out any real background on the narrator.

But what THE MANITOU does have going for it is a breakneck pace, an interesting historical background, and some sly humor, especially in the gory scenes that crop up now and then. These are over-the-top enough that they become a little tongue-in-cheek. I’ll give Masterton credit: he knows how to keep the reader turning the pages. I’ve never been a fan at all of brooding, psychological horror. THE MANITOU is anything but. Evidently there are several sequels. I don’t know if I’ll ever get around to reading them, or any more of Masterton’s numerous other horror novels . . . but I enjoyed this one enough that I might.

The movie was moved to San Francisco and Tony Curtis was the star.

I have never read Graham Masterton though I regularly spot his books in the used bookstores and exhibitions. Now I'm tempted to sample a horror novel or two.

Jeff,
Tony Curtis seems terribly miscast as the protagonist. But then, with rare exceptions, I'm not a Tony Curtis fan.

Prashant and George,
I plan to read more by Masterton, but Lord knows when I'll get around to it. I believe I read one of his historicals many years ago, but I can't recall which one.

That was the first movie I ever walked out of!

THE MANITOU the movie is famously Not Good...one of Curtis's line-readings is notorious...first hearing about the victim's growth, he all but shouts, "In hah neck!?!"

Tony Curtis was ideally cast - an extension of his earlier con men gone to seed. Even if this was the last thing he ever expected to star in.He was game enough to plug it on The Mike Douglas SHow, where he compared the all-powerful title thingee to Universal Studios head Lew Wassermann.